The enthusiastic TV personality and all-round science advocate Maggie Aderin-Pocock is sharing a long-held passion for space and the stars.

Think ‘space scientist’ and you may not automatically think, “Black dyslexic kid from a broken home in London,” as Maggie Aderin-Pocock says she’s been described.

But wonderfully, that’s exactly what Aderin-Pocock is. She’s a bubbly, enthusiastic scientist who — through a BBC space programme and regular live events — has spent decades inspiring hundreds of thousands of people young and old about the craters on the moon, the twinkle of stars in the sky, and the gas clouds around Jupiter.

She’s passionate about how the world of science can bring people together — and about how exactly the industry needs to change to be a truly positive force for equality.

In a video for the Royal Society, Aderin-Pocock explained that she grew up amid the hysteria of the space race, and alongside classic space programmes like The Clangers.

She says she struggled with identity as a child , being told she was a “lost Nigerian”, because she’d never been to Nigeria, yet “not British”, because she’s Black.

“Space was that wonderful thing that transcended all of that because, when you look at the planet Earth from space, there are no countries, there are no boundaries. We’re just one people.”

A telescope-making course helped her find a passion for the stars. This love propelled her through an academic career, past any limitations set out by her dyslexia, and earned her a degree in physics and a PhD in mechanical engineering from Imperial College London.

Her day job sees her build space satellites. She has travelled to all sorts of places to continue her science work, including studying the “majesty of the milky way” from Uluru in Australia, the Pendine Sands in Wales, and the Atacama desert in Chile. 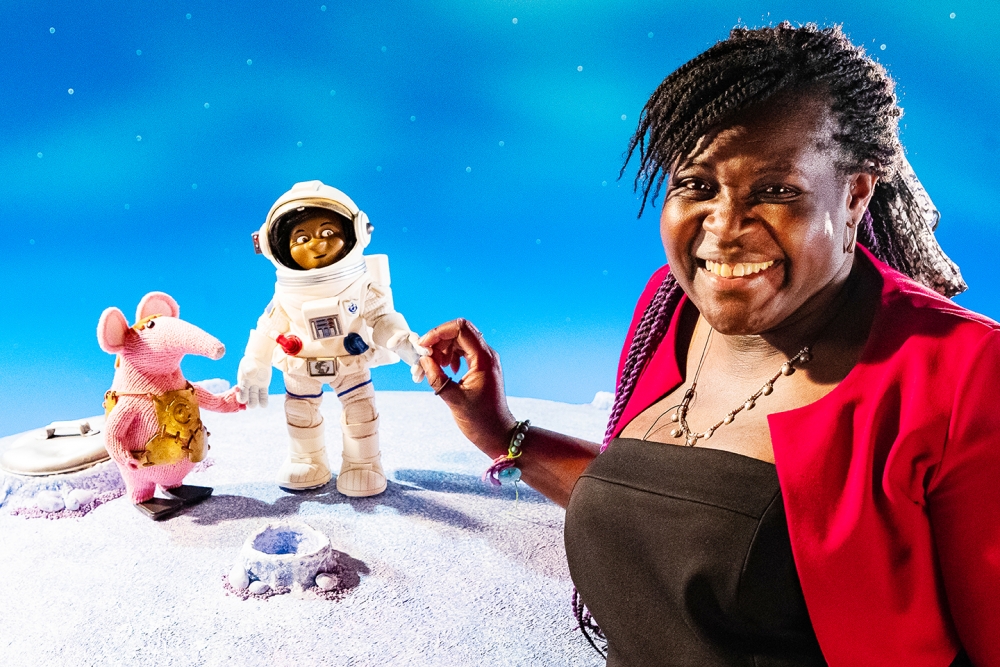 Aderin-Pocock with a Clanger and an astronaut

Aderin-Pocock runs a science communication company called Science Innovation Limited, which aims to bring science “to as many people as possible.”

This includes events to reach kids. Aderin-Pocock has engaged an estimated 250,000 children around the world through her science talks, according to Samsung.

In a video, she explained her outlook on providing equality to everyone, regardless of background. “Many of our sciences are very male-dominated. And that’s just not right. There are problems the world faces, and as women, we bring our own viewpoint to it. If only 50% of the population is doing science that we all need, then it is very skewed in one direction.”

Perhaps in keeping with someone fascinated by the stars, Aderin-Pocock has often mused on how exactly the world will change in the coming years.

In an interview with The Guardian, about food today and in the future, she said that she thinks there will be 3D food printers in our home kitchens within 20 years — offering people the ability to select a recipe and create dinner if desired.

She recently teamed up with technology company Samsung to co-author a report on the SmartThings Future Living report.

Written alongside architects Arthur Mamou-Mani and Toby Burges, as well as urbanists such as Linda Aitken and Els Leclerq, the report concludes that London in the future would be a place “where high-rise apartments dwarf Europe’s highest buildings”. She says that enormous “earth scrapers” that tunnel 25 stories deep will be common, as will medi-pods to scan for illnesses and programmes to colonise the Moon and Mars.

“Our lives today are almost unrecognisable from those a century ago,” she said in a statement.

“The internet has revolutionised the way we communicate, learn and control our lives. Just 25 years ago, technology like SmartThings would have been inconceivable, yet today, developments like this let us monitor, control and secure our living spaces with the touch of a smartphone.

“We are likely to see the emergence of towering megastructures as well as sub-aquatic cities and transportation via advanced flying drones – some of which could be strong enough to transport entire houses on holiday.”