India’s attitude towards menstruation is a reflection of the inequalities and struggles that women face in the country. Periods have long been a taboo subject the world over due to cultural factors, but in India, these conversations are stunted even among women, which has led to a lack of education around feminine hygiene solutions, the workings of the female body and the environmental impact of menstrual waste.

Things are changing though, and this was made apparent in the 2018 Academy Award-winning documentary ‘Period. End of Sentence.’ showing Indian women fighting the stigma surrounding menstruation and their empowerment as they begin manufacturing sanitary pads.

In the last few decades, we have seen an emphasis on ensuring that all women around the world have access to feminine hygiene products, but was anybody thinking about how to get rid of this waste produced monthly by half of the planet’s population?

Seeing as the natural process of the period itself is still somewhat of an unspoken topic in India, so it goes with conversations around the safe and responsible disposal of period products.

The Menstrual Hygiene Alliance of India estimates that there are 336 million menstruating women in India, of which 36 per cent — equal to 121 million women — use disposable sanitary napkins.

Let’s say a woman uses 8 sanitary napkins per cycle — and that is being extremely consecutive — and has 12 cycles a year, this implies that India has almost 12 billion sanitary disposable napkins to get rid of every year, of which the majority are not biodegradable or compostable.

This is on top of the mountains of other types of waste that India is struggling to contend with, but fear not — people are definitely becoming more aware of menstrual sustainability and this can be seen by the rise in use of such products as the menstrual cup. We are starting to see an increase in companies aiming for sustainability in the area of feminine hygiene.

Regular pads are made up of 90% plastic. Not only does this make them incredibly bad for the environment, but it has also been found that the use of synthetic materials is detrimental to women’s health: chemicals enter the bloodstream, increasing chances of cervical cancer, UTIs, yeast infections, rashes, allergies and skin sensitivity. The chemicals and toxins in pads such as perfumes, polymers and antibacterial agents are also extremely harmful to the body, and bleaching (a commonplace occurrence in sanitary product production) causes toxic by-products that disrupt hormonal and endocrine functioning.

While India is part of the problem of mounting menstrual waste, it also appears to be spearheading the route to solutions, with many of the new biodegradable female sanitary products coming out of the country.

This huge cultural shift was jumpstarted by the founder of Jayaashree Industries, Arunachalam Muruganantham, from Coimbatore, who was troubled when he found the rags his wife used during her menstrual cycle.

He invented a small, low-cost sanitary napkin-making machine that anyone could learn to use within three hours.

His mini-machines, which can manufacture sanitary pads for less than a third of the cost of commercial pads, have now been installed in 23 of the 29 states of India and he is currently planning to expand the production of these machines to 106 nations.

His invention has earned him many names, including, “pad man” and “menstruation man” and his work is featured in the movie Period. End of Sentence.

His machines have empowered millions of women in India to make their own sanitary products that are cheaper and kickstarted a revolution that aims to reduce India’s mountains of menstrual waste by making biodegradable/compostable products.

Here are 7 sanitary pad brands manufactured and distributed in India that use 100% biodegradable products. 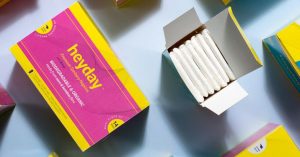 Heyday was launched by Delhi-based entrepreneur Deepanjali Dalmia in September 2017. These plastic-free napkins are made from corn and bamboo fibre — raw materials that have natural sterilisation effects. They contain no chemicals, plastics, perfumes, bleaches, latex or toxins and start decomposing after 6 months. 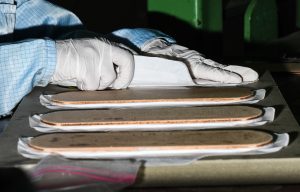 Saathi was founded in 2015 by Kristin Kagetsu, Amrita Saigal, Ashutosh Kumar, Grace Kane and Zachary Rose who joined forces to create “fully” eco-friendly, biodegradable sanitary napkins in India. This led to the development of a sanitary napkin using locally-sourced banana fibre from the state of Gujarat that degrade within 6 months – 1200 times faster than the disposal of plastic pads! Saathi aims to increase access to sanitary pads for 1.5 million women by 2023.

Soukhyam sanitary towels — meaning “well-being” in Malayalam — were born out of Kanika, a Kerala-based NGO run by elderly women. Inspired by Arunachalam Muruganantham, they got in touch with him and he came to set them up with one of his machines and trained them on how to use it.

The group of women produce around 200 packets of Soukhyam, 100% biodegradable sanitary napkins made from wood pulp and gel cotton, and give most of these away to women for free. 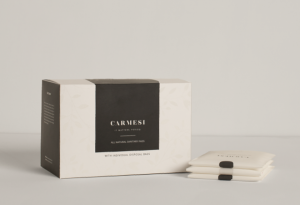 From the day co-founder Tanvi Johri started her period she suffered allergies from the synthetic materials found in contemporary, mainstream menstruation products and was chagrined by the inconvenience of disposal. When trying to find a product that would not irritate her skin she discovered that Indian producers of sanitary napkins were not obliged to disclose the ingredients in their pads distributed in the country.

This sparked the idea for Carmesi, all-natural and fully biodegradable sanitary pads that are made from corn starch, bamboo fibre and compostable bio-plastic. The stylishly packaged premium pads also come in completely biodegradable disposal bags, removing some of the hassle that comes with menstruating while being kind to the planet.

Sakhi sanitary pads are produced by a group of three housewives turned businesswomen in Goa, who make up Saheli, a self-help group founded by Jayashree Parwar in 2015. Parwar decided to confront poor sanitary disposal methods in Goa’s Bicholim district, her local area.

They get all of their raw materials from the south Indian state, Tamil Nadu, with the main component being pinewood paper. Amazingly, when buried in mud Sakhi pads degrade within eight days.

Their eco-solution is now spread across 40 units in India and 5 countries in Africa with experiments/ research to use other available indigenous material like Jute, Banana Fibre, and Water Hyacinth. 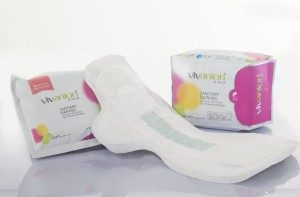 100 per cent bio-degradable, Vivanion pads have an anion (negative ion) strip which suppresses bacteria growth and odour, while also improving blood circulation. They are infused with medicinal herbs that help relieve cramps and maintain pH balance, and have leak protection lines on both sides. The napkins biodegrade within one year and come in a one cycle pack of four overnight pads and two panty liners for heavy and light days.