For many people around the world, there was no period of remote working during lockdown. No government schemes to replace lost salaries.

28-year-old Stanley Gómez, from a tough neighbourhood in El Salvador, was in exactly this position. His job as a children’s entertainer became impossible in March and seems unlikely to return before August.

But as set out in a touching portrait in digital newspaper El Faro, Gómez used his imagination and entrepreneurial spirit to make the pandemic pay—and continue supporting himself and his aging aunt. 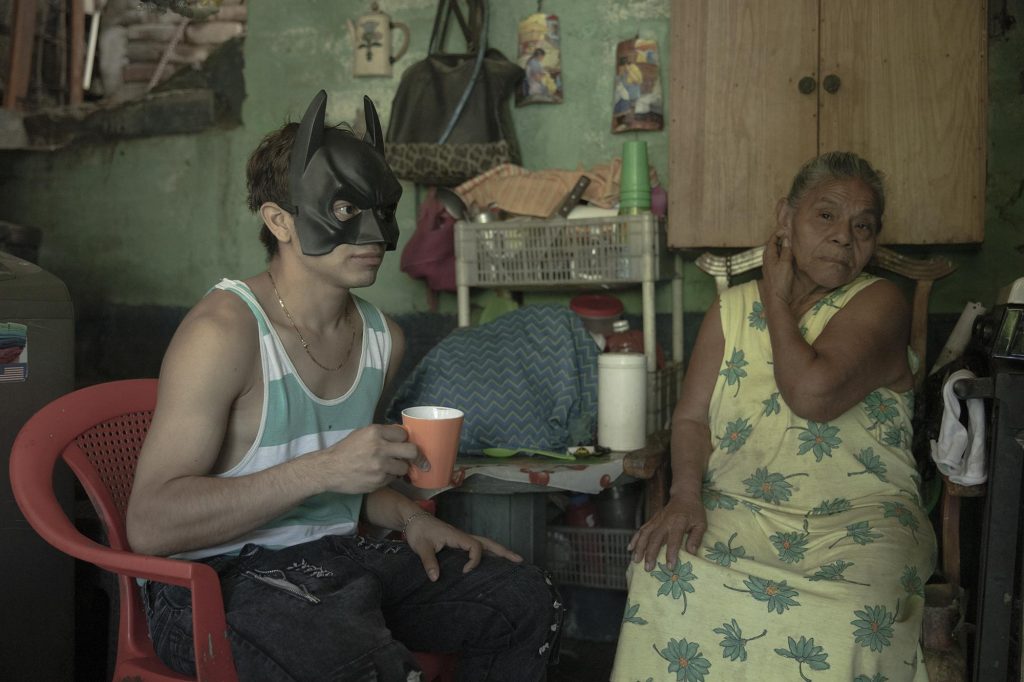 Gómez and his aunt. Photo by Carlos Barrera for El Faro

“Protect Your Family. Use a Mask”

Journalist Carlos Barrera visited Gómez in his home town, delighting the reader with his first impressions:

“Batman is finishing up a few stitches on his costume in the Modelo 1 Community in San Jacinto. He adjusts the suit, it’s still loose: There’s space around the waist and arms and across both sides of the torso. The only thing that fits is the mask. He barely fills the rest with his body.

“Batman is skinny and short.”

Barrera tags along as Gómez—Batman—hits the streets and approaches a queue of people waiting to go into the shops. “Protect your family. Use a mask,” the strong voice rings out, the effect no less endearing for the gaps in the suit that reveal bits of Gómez’s skin. “Protect your family. Use a mask. One dollar each,” he adds. It’s a hot day and Batman is sweating. He only sells three masks in three hours. But “algo es algo.”

Gómez was born and raised in Soyapango, widely considered the most dangerous city in Central America. He had a difficult background: His father was shot and killed while working as a security guard on the prophetically named boulevard, “The Heroes.” He and his mother moved around a lot, as they often couldn’t afford to pay rent, which led to harassment from gangs. Gómez was forced to leave his mum at 12 years old and move in with his aunt. Although this place wasn’t necessarily secure, it was the best he’d had.

At 16, after leaving school, Gómez got a job at a local factory and learned to sew. He saved up for a sewing machine and opened his own business in 2016, buying and repairing old superhero costumes, then appearing as entertainment at children’s birthday parties.

By spring 2020, business was booming and Gómez had managed to employ five other people. But Coronavirus hit, and he and his aunt, Misaela Pérez, a pupusas (thick flatbread) seller, were suddenly without income. Gómez withdrew $50 from his savings and bought enough fabric to make masks in his “lair”—a room looking onto a dirty nearby river, which almost rose up to his window during recent storms.

He became a staple feature on the streets within days of launching his new gig. This Batman sold masks individually, or to order, sewing on characters or bright colours as requested.

In three months, he sold around 300 masks for one dollar each. That’s $300, on an initial investment of $50, which has been enough for him and his aunt to survive. But he’s worried because it seems like public gatherings and, therefore, birthday parties—where he makes his money—won’t be back on again until 6th August in El Salvador. Two more months of struggling for money.

The journalist accompanies Gómez as he hits the streets again—the unavoidable truth about the financial challenges ahead hanging in the air between them. Batman gamely takes a picture with two women and sells them a couple of masks. Before they leave, the superhero offers them a card with his number on and information about his party services.

“This Batman doesn’t survive through anonymity,” the journalist writes.