Ikponwosa Ero: The Lawyer Campaigning for the Rights of People with Albinism

Ero, who herself was born with albinism, is the first-ever UN Expert for the cause

Albinism refers to a range of disorders that result from a reduction or absence of melanin. The severity of the condition varies but results in white skin, light hair, and vision problems. Yesterday, 13th June 2019, marked the UN’s 5th annual Albinism Awareness Day and the theme — “Still Standing Strong.”

“This is a call to recognize, celebrate and stand in solidarity with persons with albinism around the world, and to support their cause – from their accomplishments and positive practices to the promotion and protection of their human rights,” declared the UN in their statement.

People with albinism worldwide face multiple forms of discrimination and violence, simply because of the lack of pigmentation in their skin. In Africa particularly, those suffering from albinism face the problem of misplaced identity and ostracism from their communities. For people of colour living in western societies with albinism, this misplaced identity is coupled with the blight of racism making for a confusing and often painful existence, especially in childhood and teenage years.

There are still terrifying and widespread myths that the organs and limbs of people with albinism bring prosperity. As a result, in some countries, people with albinism—even infants—are hunted, dismembered or killed by individuals who sell their body parts to witch doctors for thousands of dollars.

Children with albinism not only live in fear of attack, but they are also often segregated from society, sent to live in temporary shelters, and separated from their families and communities.

However, much is being done to dispel these myths and protect the rights of people with albinism. The woman at the forefront of this is Canada-based Nigerian lawyer, Ikponwosa Ero.

Ero, who herself was born with albinism, became the first-ever UN Expert on the enjoyment of human rights by persons with albinism in 2015 (coinciding with the inception of the conditions international awareness day), highlighting that there is a clear need for government intervention to stop discrimination and attacks.

Inspired by her experiences as a person with albinism, Ero has dedicated her life to working specifically on the issue of human rights as it applies to persons with albinism.

On growing up with albinism in Nigeria, she says it was a “painful paradox”, as the love she received from her family at home was opposed by the “hostile” society she was living in. She fled the country as a teen and moved to Canada where she began working in law.

Her work has seen her travel to countries across Africa — notably Malawi and Tanzania where discrimination and danger for this group is highest. She also came up with a regional action plan that has been taken to the African Union for endorsement and is continually raising funds to conduct valuable research to gain data that will enable decisions. 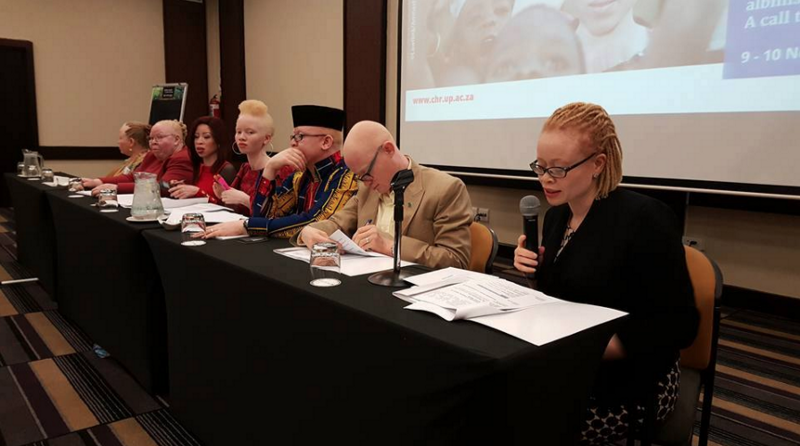 Ikponwosa Ero UN Independent Expert on the Enjoyment of Human Rights by Persons with Albinism speaking at a Disability Rights Conference in Pretoria: Image Standing Voice

In January 2016, Ms Ikponwosa Ero submitted her first report on albinism to the UN Human Rights Council. Adding to the information contained in the report in 2017, an updated version was presented to the Human Rights Council, which included a focus on witchcraft as a key root cause of attacks against persons with albinism. And in July 2018, the Secretary-General transmitted Ero’s report to the General Assembly in accordance with Human Rights Council resolutions.

Yesterday, on World Albinism Awareness day, Ero expressed how happy she was to see the unexpected spread of beauty contests celebrating people with albinism and an increase in visibility of albino models throughout the world, saying, “Who knew that something that had been so overused in other contexts [fashion] could be useful for people with albinism to show that they are human beings and that there is beauty in them as well.”

She also stated that while there were signs of improvement, this year there has been more cases of attacks in certain countries leading up to elections— particularly in Malawi, where belief in the magical powers of the body parts of people with albinism runs deep.

Ero also commended the work of Tanzania for “taking responsibility for a lot of the atrocities that had been committed against persons with Albinism—in particular, launching a reintegration programme for all the people who were displaced in the height of the attacks in the country between 2008 and 2016.

She also congratulated Kenya’s government for launching an albinism programme that spends one million dollars every year to tackle the problems faced by this group of people.

Ero’s work with the United Nations highlights the importance of awareness days and involving experts with experience and deep-rooted passion for human rights.

Yesterday, Ero called for “anyone [with albinism] who has lost hope because they feel their rights are being ignored or never listened to—to take heart and take hope. And above all, remain standing.”