After working in politics, nonprofits and lobbying, the duo founded CrowdLobby to help give everyday people a voice in the US legislative system.

The difference between an idea and support for a potential law often lies in the hands of a political lobbyist. In the United States, lobbyists will act on the behalf of privileged citizens, corporations and special interest groups, attempting to give a voice to their needs and influence Congress to take action.

However, as lobbyists demand thousands of dollars per month to consider speaking on one’s behalf, access is prohibitive for the average citizen.

After interning in the lobbying sector, the White House, the Virginia Attorney General’s Office and on the campaign trail, Heidi Drauschak wanted to give regular Americans the power to affect change in a tangible way.

Similarly, much of Samantha “Sam” Biggio’s experience in is the non-profit arena, working with organisations such as AmeriCorps, the Chesapeake Bay Foundation and the Southern Environmental Law Center. Well-aware of the limitations of non-profits, she yearned to find a way to make a difference.

While enrolled in a law degree programme at the University of Richmond, the duo founded CrowdLobby to help everyday Americans access the legislative system.

“Lobbyists do have a huge effect on current legislative processes,” Heidi told TechCrunch. “Until we can totally change the whole structure, we have to play the game. It’s not that the game is a horrible game, but it’s just that not everyone gets a chance to play.”

CrowdLobby is a non-partisan organisation that serves as a medium between everyday people and political lobbyists. Users can choose to donate to campaigns that support causes they care about through the company’s platform or submit their own campaigns.

Once the crowdfunding goal has been reached—currently about $50,000—the company hires the lobbyist on the users’ behalf.

As the hiring process consists of aggregating the funds, determining who exactly to hire and maintaining ongoing communications with the lobbyist, the company is currently charging a relatively high processing fee of 25 percent. However, this fee is only charged once a campaign reaches its fundraising goal.

“We want to give people the exact same benefits that someone who normally hires a lobbyist would get,” Heidi told TechCrunch. 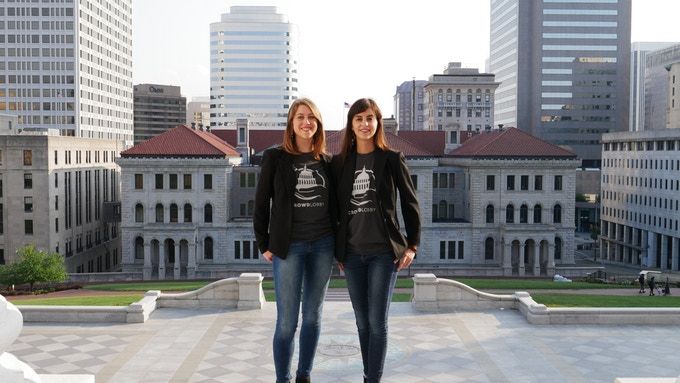 Campaign contributors are also given an opportunity to opt into the update system to keep abreast to what’s happening in the legislature. CrowdLobby hopes to eventually create a system to interact with the contributors and receive feedback about the direction of the campaigns.

While the campaigns currently on the company’s website concern matters specific to Virginia, where CrowdLobby is based, users can submit campaigns about federal or state issues anywhere in the country.

To be considered for the CrowdLobby vetting process, the campaign needs to address a specific legislative solution to a problem—as opposed to a general idea— and cannot violate the company’s discrimination policy.

“The community can determine if a campaign goes live,” Sam told TechCrunch. “We try to stay out of that process as much as possible and be the objective tool for whatever the people want.”

The company raised $35,000 on Kickstarter last year to bring the project to life. CrowdLobby had originally considered looking for private investors, but they then realised “how ironic it would be to fund the People’s platform with a few people’s money.”

The company is currently enrolled in the Lighthouse Labs startup accelerator, where it received additional funding.

“Anything political is always going to be dicey,” Heidi said. “But we’ve been setting ourselves up to take [the venture funding] route when we’re ready.”