Pencil case, pens, notebooks, erasers, a bulletproof backpack. For parents worried about their kids’ safety, this is what a lot of back-to-school checklists will look like this year.

In light of the recent shootings in El Paso, Texas and Dayton, Ohio, which saw a total of 31 people dead—public and school safety is being pulled into question more than ever.

The United States’ recently relaxed gun laws, high rates of gun crime and historic school shootings are enough to make any parent terrified of sending their child out into the world.

Thus, Yasir Sheikh, the CEO of self-defence brand Guard Dog Security, believes that children going to school or public places should be given bulletproof backpacks.

“We don’t necessarily like when parents and children are thinking about carrying a bulletproof backpack after some tragedy, but safety now is part of the process of going to school or going to a public place,” said Sheikh.

The company started making the backpacks last year and have proven to be very popular. They sold out several times after the 2018 Parkland, Florida, school shooting that left 17 people dead.

Proshield backpacks look like any regular backpack and come complete with useful pockets and a USB charging bank, but the main feature is the protection they provide from high-calibre weapons.

They come in a variety of fun colours and designs to appeal to children and more muted tones for an older age range. 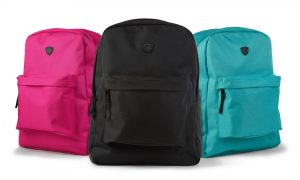 “We encourage people to think proactively today,” Sheikh told Dezeen. “We want them to think about safety and protection on a proactive level, not on a reactive level.”

“Just like people would have home security systems for their house if there was a series of robberies, we also think people should start thinking about a bulletproof backpack if there is a series of shootings,” Sheikh added.

Costing between $119.99 and $299.99, the bags are made from polyethylene, a durable yet flexible plastic material with tightly woven fibres that can stop handgun bullets.

The backpacks protect against 9mm and 44 Magnum handguns—a similar level of protection to the bulletproof vests worn by law enforcement officers in America.

However, they are unable to stop a high-velocity rifle, such as the AR-15 used by the Parkland High School shooter.

The Proshield range is currently being advertised on the Guard Dog Security website as available to pre-order for 15 September 2019, when children return to school after the summer holidays.

The company’s website also states that a portion of every bulletproof backpack sale will go to Make our Schools Safe—a national non-profit organisation dedicated to finding innovative ways to protect school children and teachers.

While the ProShield Scout isn’t the first bullet-resistant backpack Guard Dog Security has made, it is the first model the company has targeted at back-to-school shoppers, and the first year this model has been sold. Its other backpacks are geared more toward professionals and travelling adults.

Other companies that make bulletproof backpacks are TuffyPacks and Bullet Blocker.

“Our sales of our backpacks and inserts have increased approximately 200% over the past few years,” Bullet Blocker founder Joe Curran said, as reported by CNN. “During the back-to-school season, we sell many of our products to parents, teachers and college students.”

Ballistics experts and police chiefs have warned parents that these types of products would in no way protect their children against the assault rifles often used in school shootings but may provide psychological relief and peace of mind.

Recently, critics have been arguing that these companies are using tragedy as a marketing opportunity and exploiting parents’ worst fears.