Co-founder Will Ascott spoke to Global Shakers about the three-year-old project, in which refugees learn to skate alongside local Greek kids.

“I very much struggle with talking myself up,” says Will Ascott, the co-founder of Free Movement Skateboarding. “But one of the nicest reviews we’ve ever had is from staff at one of our partner projects, saying the kids that go to Greek mainstream school almost boast about the fact they go skating. They’re hyped for it every week and they’re loving the sessions.

“For some of them, the ones that have been with us longer, it’s become an element of their identity. That’s a very sweet thing.”

Ascott and Free Movement co-founder Ruby Mateja are the embodiment of good people making good things happen. They’ve spent the past three years in Athens running a refugee solidarity project that teaches kids how to skate via mobile skateparks.

The participants—an equal mix of girls and boys, older and younger kids—include people from Syria and neighbouring countries and people born and raised in Athens. Theirs is a space free from language barriers and as free as possible from the day-to-day challenges inherent in growing up in a new country—or in the tough, “purposefully degrading” conditions that many find themselves in in city refugee camps. 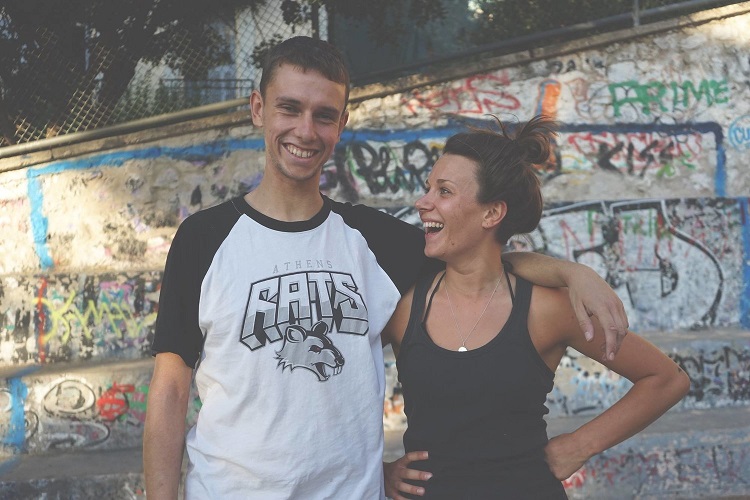 Will Ascott and Ruby Mateja. Photo by Alexis De Tarade on Skatepal

The beginnings of Free Movement Skateboarding

Everything began in 2016, when Ascott and Mateja travelled to Palestine to volunteer with SkatePal, a well-respected social skateboarding organisation.

Both long-time skaters, they were inspired by a new and inclusive edge to skating, which previously had a reputation for being a bit of a boys club. At SkatePal, they found a project that was gender-balanced from the ground up, in which people of all ages and skill levels learned together and supported each other. They saw how powerful skating could be in the right contexts as a tool for inclusion.

After the volunteering period, Ascott travelled to Athens to work in a community kitchen, where he met one of the co-founders of UK charity Help Refugees, which specialises in funding grassroots refugee organisations. Ascott set out his vision for an inclusive skate project in the city, which has in many ways been abandoned by European authorities to deal with the influx of refugees onto the continent. Help Refugees was interested, so he sat down with Mateja and successfully put together a funding proposal.

“Free Movement Skateboarding has three key aims: To empower young people through skateboarding, using local integration and inclusion; to empower women and push towards gender parity, with gender-balanced instructors at every session and women’s only sessions; and to encourage positive mental health and physical wellbeing,” Ascott explained, adding that they run yoga warm ups and have also done sessions with art therapists.

After a little more time back in the UK for additional fundraising for the project, the duo moved to Athens to get everything up and running. Once in the city, they approached various refugee camps and youth projects around the city with their prepared project and went from there.

“[The project] was a real convergence of everything I care about and want to do in my work and timing in my life.” True to his values, Ascott explained that while he did work for a long time to be able to save up for his volunteering trips and meet the right person at the right time, it’s important for him to remember inherent benefits he had as a “white middle-class lad who can afford to go and not work for two months and do some voluntary stuff.” 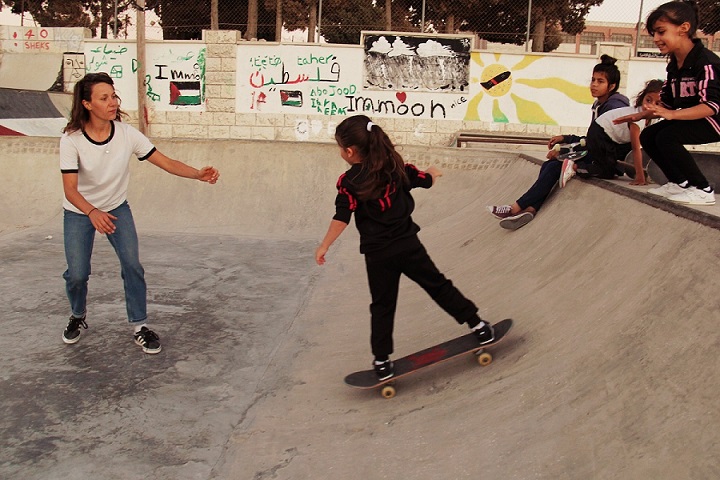 Ruby teaching while in Palestine. Photo on SkatePal

The team normally fits the mobile skate ramps into their van and travels between different locations—squats, refugee camps, community centres. On a given day, this could be a session on a public basketball court in partnership with a young unaccompanied minor’s shelter or a youth project in the centre of the city.

“Some staff there bring young people from that project. Hopefully there’s some Greek local kids there, and maybe their families, as well,” Ascott said. “If we’re really lucky, some migrant mums from the squat and some mums from the school will go have a natter on the side, and that’s a really good thing to see.”

Afterwards, the Free Movement Skateboarding team would pack everything away and travel to a refugee camp, which “presents a whole different set of challenges.”

“Because of the hectic environment, the horrific overcramming of the camps and the real lack of space—and the lack of quality space in which to teach—we have a register for groups to make sure we’re taking the right kids, from, say, the younger age group, stamp on their hands to say they can participate, then we go into a warm up.

“If you try and do a free for all, in that space at least, it just doesn’t work. Skateboards go missing. We’re a real spectacle in that camp, a lot of people come to watch, and boards can get pinched, which is very understandable considering the circumstances. It’s a hectic environment, but I enjoy it a lot. It just takes structure.”

The global coronavirus pandemic forced Free Movement Skateboarding onto a three-month hiatus, and it’s taken longer for the country to open back up for refugee services than it has to open up again to tourists. But sessions started again about a month ago, taking the appropriate measures to clean equipment and wear masks to ensure participants and instructors remain safe.

You also “have to explain why it is worthwhile to have a space that is shared by everyone. If we’re all enjoying this, then it’s a better place for everybody.”

After three years of near constant activity, Ascott mused on some of the key lessons that had been learned while running the projects in Athens.

“You always get very drawn in to the one person you’re teaching,” he said. “Perhaps they’re doing something dangerous, and they very much depend on you to have that support when they go down a ramp for the first time—their knees are shaking, and your focus is 100 percent on them.”

What’s useful, he said, is to have enough staff so that you can be focused on the individual while others can step back and manage what’s happening in the wider group at the same time.

You need someone “with the capacity to be the big loud voice that guides productively, clearly, and compassionately,” he says. “It’s not like being a teacher and shouting at someone—it’s giving some guidance and structure to a session that helps the kids learn something new and get something out of it.”

Otherwise, he says it’s easy for a group to “peter off into kids going around on boards on their bums,” maybe scrambling into one another, and harder to keep it “safe and fun.” You also “have to explain why it is worthwhile to have a space that is shared by everyone. If we’re all enjoying this, then it’s a better place for everybody.” 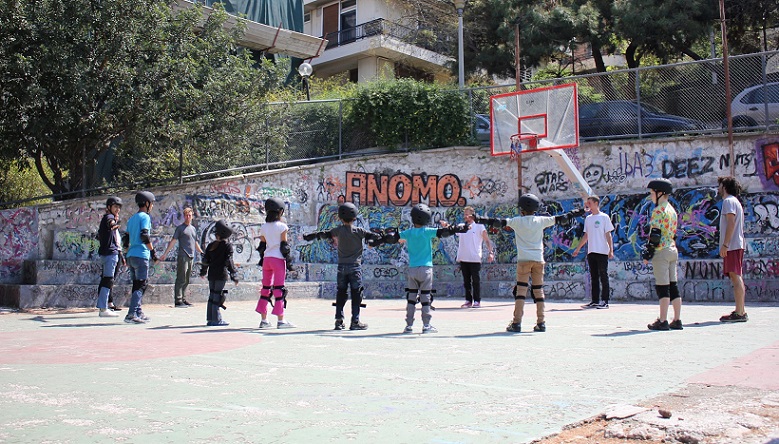 On its website, Free Movement stresses that skating teaches you balance and focus—skills that filter into everyday life—and a strong sense of resilience, in that you don’t learn and grow without first collapsing onto the ground and having to pick yourself up and try again.

“What I love about our sessions is we foster that environment of what I would call a modern skate session, where it does have that level of inclusion.”

“Grassroots NGOs have the capacity to fill the gap quickly and navigate bureaucracy a little more quickly and quietly,”

But Ascott was clear to remain grounded about the challenges that persist in the world of skating. Much like comparable activities, it’s not an inherently inclusive activity and comes with its own particular baggage to unpack.

It’s also clear that this is not a level playing field. Most of the kids in the refugee camp don’t leave the camp or have their own skateboard. If they skate, it’s only for the time spent in the session, which involves spending time queuing up for the board. 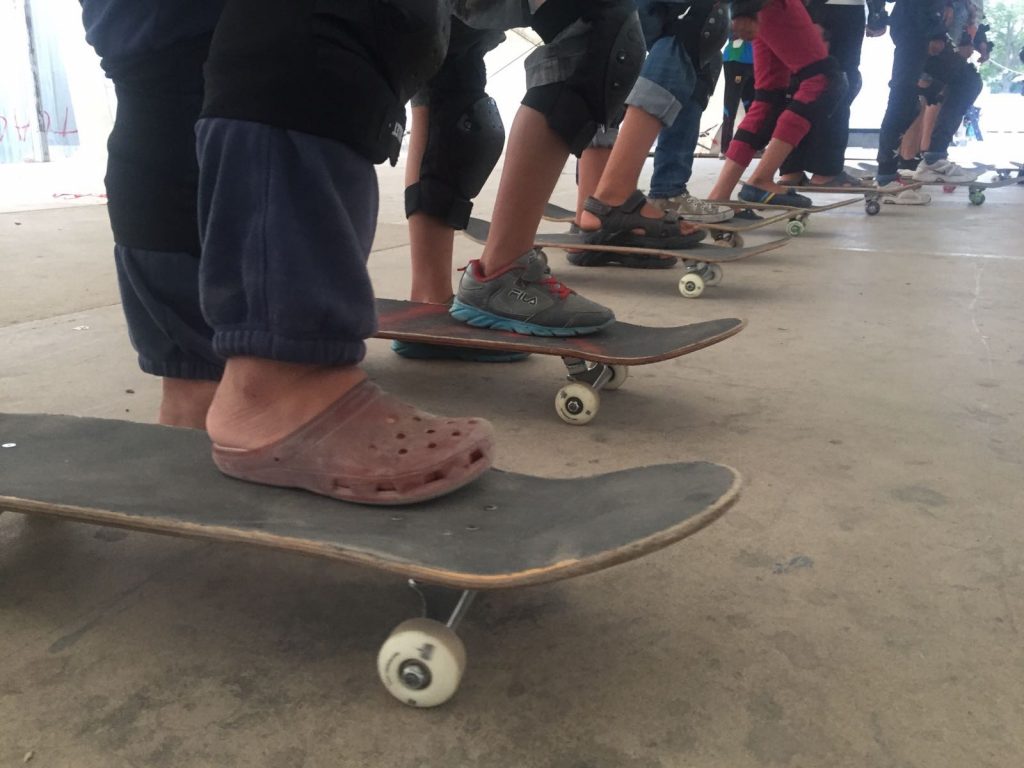 The international development graduate was diplomatic. “Grassroots NGOs have the capacity to fill the gap quickly and navigate bureaucracy a little more quickly and quietly,” he said. “There’s times when you can navigate around the state a little more easily, which are becoming increasingly difficult, especially under this new government.”

Ascott explained that he’d seen this power to respond to immediate need again over the winter, while fundraising for Help Refugees. Once news came in that people were freezing to death in Serbia, the charity bought thousands of blankets and had them distributed to people in need within 48 hours.

These benefits are at risk in Greece, which is doing its utmost to limit which NGOs can work in refugee camps—putting in new accounting and documentation requirements before authorising operations. “Basically, only the larger NGOs will be able to comply,” Ascott said, mournfully. “That test is necessary to access camps. We may well not pass that as we’re a UK registered charity. We’re trying to see legally if we can reform our accounts to make them accessible by Greek standards, but it’s possible we’ll have to adapt our in-camp provisioning to be just outside it in an appropriate space.”

With the focus on coronavirus safety, he said, such new reforms were not getting the international attention they deserved. “There’s a lot of NGOs that are struggling with this now, and a friend’s project has gone through that process. They handed over the necessary documentation, and they failed and were not given a reason why.

“It’s another excuse to just formalise these camps, exclusively using bigger state-run NGOs that get the smaller solidarity groups out, because the bigger ones are generally more apolitical in their rhetoric, whereas the smaller ones speak out.”

Free Movement Skateboarding is entirely funded through grants and donations and would greatly appreciate anything that could be spared. The charity has options for both monthly and one-off donations or opportunities to provide funding through one of its crowdfunding campaigns. For more information, visit the Free Movement website.