The charity Homes for Heroes has created a ‘village’ with 15 tiny houses to help make a dent on the homelessness crisis in Calgary.

Tiny Houses have been popping up across North America as a popular way to tackle the homelessness epidemic sweeping the continent. Recent estimates suggest that in Canada alone, there are at least 235,000 people experiencing homelessness every year.

In Calgary, a city in the west of Canada, the charity ‘Homes for Heroes’ has just opened a 15-building Tiny House village — the first of its kind in the country.

Each of the units has a kitchen, a bathroom, and a fold-down bed, according to Calgary News. As the project is aimed at tackling homelessness among the veteran community, the units are named after soldiers that have been killed in the line of duty.

The site — backed with a $1.5m donation from Canadian company ATCO, which runs companies in the gas and construction industries — also comes with mental health and addiction support from experts at Veterans Affairs Canada and the Mustard Seed.

“They get an understanding of what support they need, whether that be post-traumatic stress, whether they’re dealing with addiction, career re-training, education and so forth,” David Howard, president and co-founder of the Homes For Heroes Foundation, told Calgary News.

“But the whole idea is to build that package and to help the veteran work through that.” 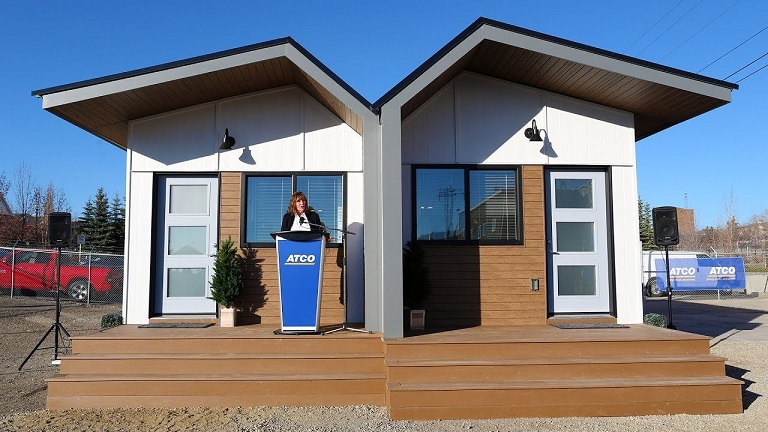 Two of the new Tiny Houses in Calgary. Photo by Calgary Herald

Calgary’s work builds on similar schemes in cities like San José, California. As covered in Business Insider, the city’s Mayor set out plans for Tiny Houses as a way to transition homeless people to a permanent residence. The city charged a small rent of $20 a month for unemployed people, or 10% of an employed resident’s salary.

The site adds that in order to encourage people not to stay for too long, the rent increases by 10% after six months. It is intended just as a temporary solution, running from June 2019 to 2022.

Other Tiny Houses have emerged in Detroit, New York, Tennessee and Washington.

Despite the goodwill behind many Tiny House projects, concerns have been expressed about the suitability of temporary villages as a way of tackling homelessness.

According to the magazine Bitter Root, for every proponent of the system — highlighting the low-cost construction and success stories for people who have used them — there are others worried about the variable quality of the service. Tiny Houses don’t always come coupled with permanent housing placement services, and they’re often built on land that is waiting to be developed — meaning the projects and house inhabitants frequently have to shift to a new site.

Similarly, Homeless Hub stresses that living in a Tiny House is not necessarily better than sleeping on the streets for people who have issues in small spaces, or need more room because they have a family.

“Tiny houses demand a radically different style of living that includes reduced dependence on modern plumbing, electronics, and other “creature comforts” that many people – even those experiencing homelessness – have become accustomed to,” a blog post reads.

“Any social housing project using the model would have to keep this mind and offer it as an option only to those who would be interested in that kind of living.”