German carpenter Felix Böck has turned a “ridiculous concept” involving millions of used chopsticks into a sustainable, profitable business that has been cash-flow positive since day one.

“What’s that English term?” Felix wondered during a convo with Global Shakers about ChopValue, his startup that has recycled 25 million chopsticks in the US and Canada since setting up in 2016.

“From the ground up!” he remembered.

“I see a lot of startups and all they have is an idea. Their first intention is not to take that initial leap to implement it. First, they go for money and that’s a huge distraction.”

“You have to have something to show. Something physical. A product or a proven customer base,” he explains of ChopValue’s success.

While they raised some funds at the beginning on crowdfunding sites, Felix says this was purely to test the market to see if people were up for buying products made from used chopsticks.

It turns out they are! 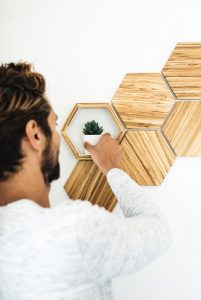 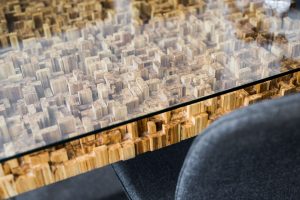 In doing so, ChopValue has created a wacky yet super innovative solution to a hugely neglected issue:

According to market research, Asian fast food consumption in the United States surged by 135% between 1999 and 2015, increasing the popularity of Asian cuisine at an unstoppable rate.

We simply can’t get enough and unsurprisingly this has lead to a significant rise in chopstick use worldwide.

It is estimated that in the Metro Vancouver district of Canada alone, approximately 100,000 chopsticks are discarded each day after being used for only 20 minutes to shovel sushi into a greedy mouth.

Sad considering that these little guys travelled approximately 9,000 km to their lowly demise — from bamboo tree to bin.

Felix Böck: “just a carpenter with an engineering degree” 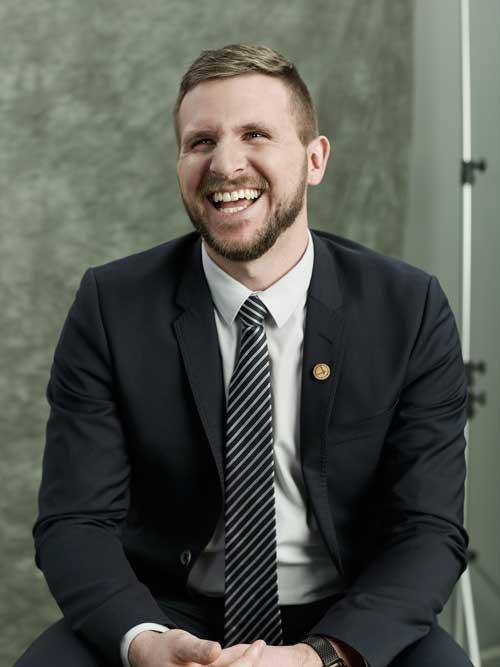 Further cementing the cliché that frustration births the best ideas, ChopValue was conceived on a sushi date (chopsticks in hand) during a particularly frustrating point in Felix’s career after relocating to Vancouver to do a PhD on structural bamboo — a material he had become very familiar with.

“I’m a typical bitter German guy who complains at a high level in my field of engineering,” he laughs.

“I’m frustrated by everyone trying to be sustainable when they are looking away from the tangible things that we can do immediately with the materials right in front of us.”

He recalls the time that he was working for the city of Vancouver on a housing crisis project.

“We have such a rapidly expanding and expensive housing market here [in Canada] and the worst part is that it’s producing so much waste from all the construction and demolition.”

“I was working on a solution for what to do with all the wood that we already have in the city.”

“In the UK for example, you can’t afford to throw wood into landfill because you don’t have much forest left so you try to use every single chip either for new products or for energy.”

Felix explains that in North America this rarely happens.

“It’s a luxury problem. We have so much forest here that people don’t touch wood that has already been used, even just once — It’s mind-boggling.”

So to show this “very conservative industry” that recycling inner-city resources is the way to go, he created and bootstrapped a viable, sustainable business out of recycling chopsticks.

“Our two main goals are to make money and be carbon neutral, and we are proving that there are solutions out there to do that.”

Not one to take himself too seriously, he says that its a “ridiculous concept and stupid that it actually works.”

“But that’s truly what I saw was possible — to develop a high-quality product, a beautiful brand and run business in a very lean and efficient way. We are a circular company and these are really our core values.”

Felix grew up surrounded by forests in the German countryside and says his obsession with wood comes from “not knowing anything else.”

His love for bamboo — not a material often found in Bavaria — came in Ethiopia during a work placement while studying wood engineering.

Anyone looking into Felix’s journey from aspiring young chippy to chopstick entrepreneur would be hard pushed not to see an alignment in his passions, skills and expertise that appears to have been set in the stars.

Still, the innovator, who describes himself as “just a carpenter with an engineering degree,” asserts that ChopValue “didn’t reinvent the wheel, we just put existing concepts together sustainably and made adjustments to create unique machinery and equipment for our process.” 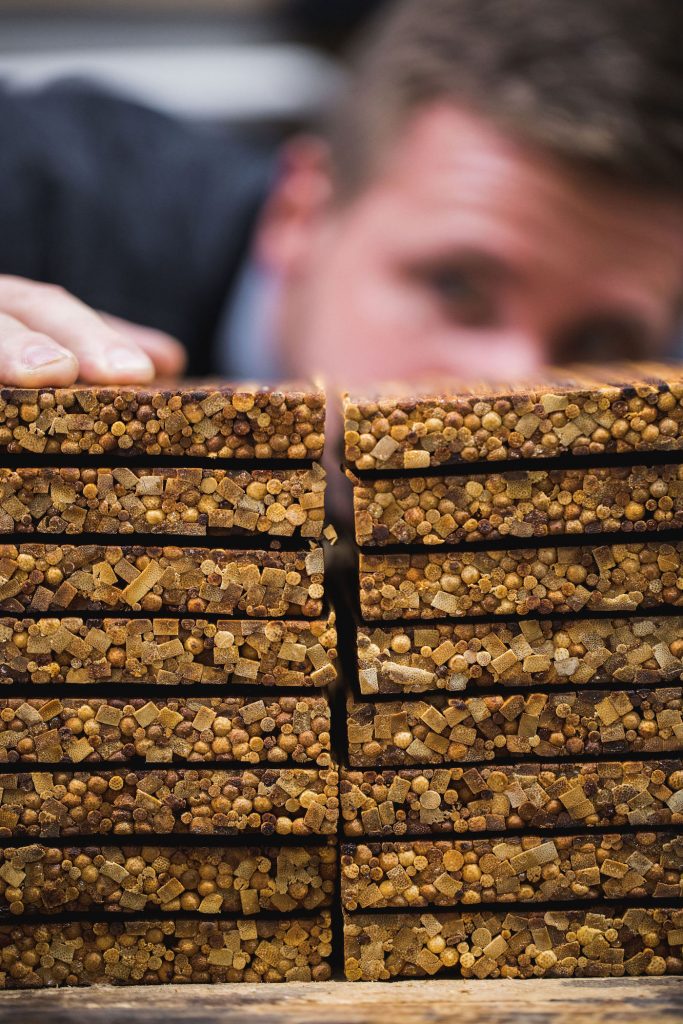 All chopsticks are collected locally and taken to one of ChopValue’s nearby facilities, where they are cleaned, sorted and pressed in a hydraulic hot press that Felix designed.

They are then transformed into ChopValue’s signature 8×8-inch engineered bamboo tiles — an innovative new material with the same strength, durability and beauty of the original bamboo.

These are the puzzle pieces used to create an array of chic, contemporary furniture and homeware for both the company’s retail collection and custom designs for businesses. 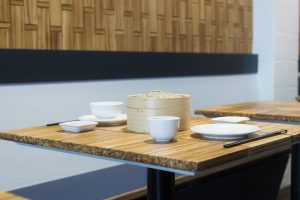 A ChopValue Client Project: Felix says that one ChopValue tabletop recycles around 3,800 chopsticks

Felix also puts the unlikely success of ChopValue down to the fact that they are the first company to recycle on a large scale for free.

“Other recycling businesses exist only to pick up materials, sort them, clean them and somehow make money by selling them — their value-added process is a sorting process.”

“Our value add is an entire engineering process where we collect materials and turn them into beautiful products so you have much more margin to play with.”

“While others need to charge, we build partnerships with customers and restaurants. The community aspect that we have created makes people appreciate what we are doing more.”

ChopValue currently has around 500 partnering companies across the 3 cities they operate in: Vancouver, Montreal, and Los Angeles.

They are made up of small and large restaurants in and out of malls, and notably, Vancouver International Airport (YVR) which recently celebrated recycling their 1 millionth chopstick. 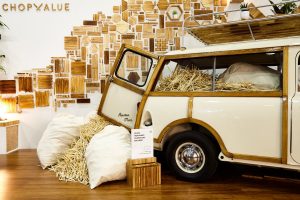 But how do you go about convincing another company to let you use their waste?

“It’s less about convincing and more about education and explanation,” says Felix.

“As the only free recycling program out there people usually ask ‘why.’ They logically come to the conclusion that, as a circular company, we just want to sell products back to them but then we explain that its free because they are providing a resource for us to create something new while helping us run a business.”

While the entrepreneur says that the response to this simple honesty is always greatly received, working with an institution like YVR, is a little different.

“They are definitely more interested in their performance, reaching certain indicators and expanding their reach with marketing but our brand can cater to that perfectly.”

“It’s really gratifying for our team to see such a huge brand like YVR support our mission, and to even make a big media event celebrating their one-millionth chopstick recycled with us.”

“They don’t do that anymore because we are picking them up in separate bins, its an overall much cleaner solution.”

Felix has decided to take ChopValue down the franchise route in 2020, which he says will allow the company to expand to 50-75 locations over the next 3 years while maintaining carbon neutrality.

He recalls that a year ago the pinnacle point to expansion appeared. With a proven concept and 18 employees, it was time to choose a path.

“I didn’t want to grow to be like the next big company or mega factory that automates everything, because I would end up losing control, sourcing materials from all over the world to become bigger and bigger and my biggest carbon footprint will be logistics again. That’s usually the nature of things.”

Wanting to replicate ChopValue in every city in the world while avoiding the beaten track, he developed the concept of micro-factories in order to maximize production efficiency while minimizing environmental impact.

“Anyone can invest in a micro-factory, pay a franchise fee and then they own the rights for 10 years to develop their own market anywhere in the world,” says Felix.

“It doesn’t really matter where because we all know there’s no shortage of chopsticks.”

This decentralised manufacturing approach is how he plans to achieve what he calls the company’s “15 billion chopsticks expansion plan.”

In their 3 locations, ChopValue has proven that every micro-factory on its own becomes a viable, profitable business and their collaboration with the local restaurant community has allowed them to demonstrate that waste can be effectively used as resources.

“Every single chopstick that we have collected has been transformed into a new product and sold.”

Looking to the future, and to Asia — where a huge amount of materials (chopsticks) could be sourced — Felix believes that in this market the true significance of ChopValue’s thought leadership could be realised.

“I definitely want to look at Japan, Taiwan, Vietnam, Indonesia, Korea, and then further down the line, China because of the impact we could have there with this tangible example of a resource-efficient circular economy business.”

Felix says: ChopValue is on the lookout for the right development partnerships ranging from strategic partners for more conscious local product choices to future franchise partners to grow our environmental impact. Get in touch!

Circulose: A New Natural Material That Could Close The Loop on Fashion