Felipe Rossi, The Dentist Bringing Smiles to the World’s Poorest

Brazil-based Felipe Rossi is the founder of Por1Sorriso, an NGO that treats the poorest people in his home country and East Africa for free.

For all the news about the Amazon Rainforest burning and a far-right, homophobic Commander-in-Chief, you could be forgiven for assuming that there was nothing positive coming out of Brazil.

But, positive there is—and it’s in the form of a heartwarming story about a charismatic dentist who just wants to make the world smile.

Thirty-eight-year-old Felipe Rossi, as comfortable in scrubs as he is in a loose-fitting Ramones shirt, has been travelling the world and providing necessary dental care to people too poor to otherwise afford it. Over the past three years, his NGO Por1Sorriso has provided root canals, cleanings, and emergency medical care to more than 12,000 people in Brazil and East Africa.

“I didn’t do dentistry to take care of teeth, but to take care of people,” Dr Rossi is quoted as saying in the Daily Mail. “Awakening smiles, without a business relationship, just for love, connects us with something bigger,” he said.

“One day, a smile will be for everyone and tears will fall with joy, just for being able to smile.” 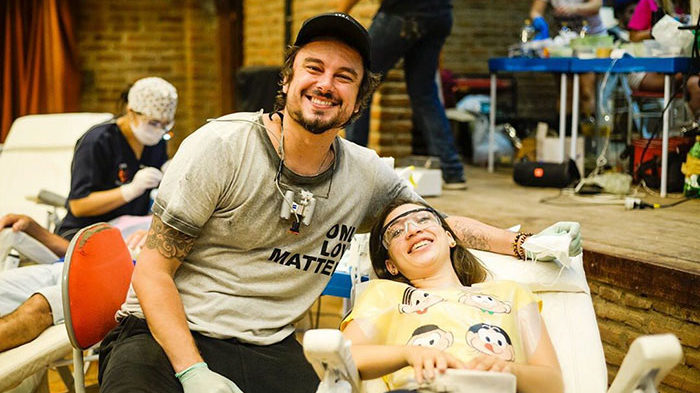 The Challenge for Felipe Rossi

In many ways, this pioneering work shouldn’t be necessary in Brazil: For years, the country was home to the highest number of dentists in the world. A BBC article adds that hygiene is such a priority for the country that most Brazilians carry a toothbrush with them, and there are even toothpaste and dental floss dispensers in some restaurant bathrooms.

The problem—as ever—is a massive social and economic divide. Dental care is simply too expensive for large chunks of the population, despite repeated access drives by the government. According to the Federal Council of Dentistry, 20 million Brazilians have never even been to the dentist.

Yet, Felipe Rossi has always believed that the status quo shouldn’t put poorer people at risk of oral disease—or force people to live with lower levels of self-esteem.

With his team, Dr Rossi works into “extremely needy communities” with little access to dentistry—riverside and indigenous populations and villages in poverty—and treats people for free. His team has been to Africa nine times and spent years caring for people in Brazil.

The majority of the work is financed through private company sponsorship—one of the biggest backers is toothpaste maker Colgate—and through individual donations through the “Smile Solidarity” programme.

The Sao Paulo-based charity has also recently reached viral fame by sharing ‘before and after’ photos of people in need of new teeth and their reactions after the procedure finishes. Without question, the result is one of emotional overload—a sudden rush of pride, self-confidence and happiness, as what was once a very visible embarrassment becomes a source of joy.

“Millions don’t know what sitting in a dental chair is like,” he adds. “It’s time to wake up…it’s time to smile.”