The young inventor from Argentina has developed Ebers, an insole that can stop users from developing ulcers or needing amputations.

The number of people around the world living with diabetes is rising, and fast. In 1980, there were 108 million people with the condition; by 2014, this had increased to 422 million.

Alongside risks to the heart, eyes and kidneys, diabetes can wreak havoc with blood flow and nerve sensitivity. This increases the chances of ulcers in the feet, which can lead to amputation when undetected and untreated.

Young Argentinian inventor Facundo Noya is well aware of this problem. While studying for a degree in biomedical engineering, he was shocked by the story of a diabetes patient who walked into hospital one day, and left two weeks later with a leg amputated below the knee.

“The foot problem is increasing all around the world — principally in this country, where prevention is not so great, but in all countries,” Noya tells GS, adding that “around 25%” of people with diabetes will develop ulcers and are at risk of further damage. 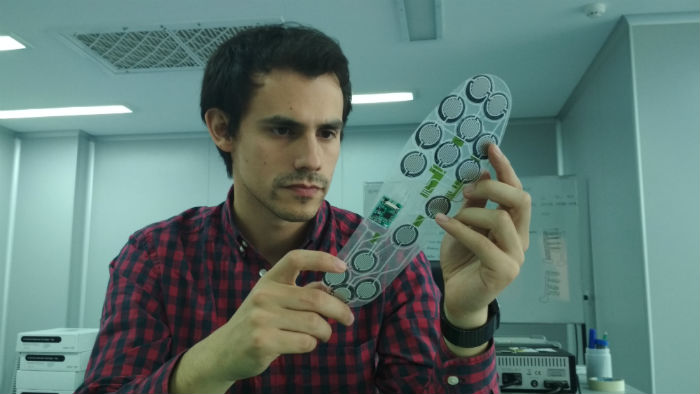 In response, Noya decided to design something that would compensate for this lack of limb sensation.

The solution was Ebers, an intelligent insole that uses strategically-placed sensors to monitor an individual’s step, foot temperature and humidity. The data is then compared with the normal pattern for the user in an accompanying app — allowing for the fast detection of issues that could worsen over time.

As Noya tells GS, the initial pitch for ‘Ebers’ was as a sock or a shoe — which changed as soon he tested the technology with medical professionals.

“We started to validate it in lots of hospitals: first in Argentina, in Córdoba and Buenos Aires. After that, we changed the product a lot. Our approach was to design a product, give it to doctors, and listen to their feedback of what they really need,” he said.

“They told us what they really needed was a thin insole and a new sensor distribution. We’ve changed everything about the product since the beginning.”

Noya made “around 100 prototypes” and had to destroy nearly all of them — “because they failed, or the doctors didn’t like something, or we had to change something with the bluetooth.” The associated application also went through multiple iterations.

The hard work paid off: In 2018, Noya presented his product to then Argentinian President, Mauricio Macri.

He was also selected as one of the Latin Innovators under 35 by MIT’s 2018 Technology Review. One of the judges described Noya’s project as “excellent,” with a strong possibility that Ebers could have a large social and economic impact.

Getting Ebers ready for the market is the next task. “Our business model is now with hospitals and doctors,” Noya said. “We’re currently manufacturing 60 pairs of insoles and we will have a commercial launch in two months’ time.”

“There are many different size hospitals and institutions,” he added to GS. “We’re trying to create a model that works for an individual doctor and a big hospital. Because when we talk with a doctor and say it costs $2,000, it’s expensive for them, but for a hospital, $2,000 is really cheap.”

The plan is to therefore charge around $500 or $600 for the insole, and require an annual payment to use the associated app. This will be cheaper for individual doctors and more expensive for hospitals working with numerous members of staff.

In the meantime, Ebers is continuing to undergo tests in Argentina, Chile and Brazil. In São Paulo, Ebers has the support of a startup incubator at the principal hospital. “They help with medical trials, they contact regulation authorities, they are also investors,” he said.

Noya adds that although it can be difficult to test medical technology in multiple locations — each country has its own culture and preferred way of working — this is essential for the planned global development of the product.

The plan is to roll out Ebers with the pilot in Argentina, then in Brazil and Chile, before expanding into Europe and the US.