When engineer André Nel’s retired father told him that he couldn’t afford a hot shower because the price of electricity had become so high in South Africa, Nel decided to dedicate his work to find a solution.

In 2014, after years of research in clean-tech, the green energy enthusiast founded Eco-V, a company that manufactures renewable hot-water and electricity solutions for communities (homes, hospitals and schools) and industries in the form of affordable and transportable ‘containerised hybrid solar microgrids.’

These work by harvesting and storing solar heat energy in insulated tanks, and electrical energy in lithium-ion batteries.

All the while, water is conserved using an IoT software management platform to optimize performance.

Eco-V states that a typical microgrid pays back over 5 years using their award-winning, patented GreenTower Technology, with a 90 percent energy saving for heating water compared to electric boilers.

Since 2014, 20 pilot projects have been implemented to improve and validate the technology. 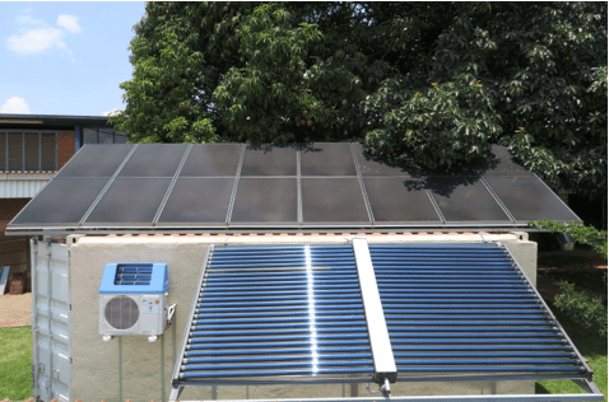 Eco-V says that with the high cost of electricity in South Africa, hot water for bathing is becoming unaffordable for the elderly. These old age homes use electric boilers that contribute up to 35% of their electricity bill.
A key GreenTower commercial pilot project installed in October 2015 at Allen Park retirement village involved replacing 5 electric boilers for 5 apartments with a single GreenTower appliance.

The success of pilots like this led to further applications for GreenTower microgrids.

In 2017, Eco-V signed an agreement with the SAVF, a Non-Profit Organization that owns 32 old age homes and 44 elderly housing schemes to implement GreenTower throughout its facilities based on a pilot project.

“We are working on implementing the first four of 50 old age homes, then the balance over the next two years as we finalize the financial models for each of the homes,” Nel told Microgrid Knowledge last month.

The homes typically house around 80 residents and 60 caregivers, but if the infrastructure for more people was needed, that wouldn’t be a problem as the microgrids are not limited by scale.

“We’ve developed simulation models to enable us to scale to any size community that uses electricity, energy for heating water, and significant amounts of water… The schools we work on have about 2,000 learners. We’re working with a mine that has 1,600 workers.”

Eco-V is also weighing in on food-security concerns in South Africa by extending its IoT platform to accommodate aquaponic systems that see fish raised in a controlled environment with plants grown in the water to make use of the natural fertilizer in the fish waste.

By bringing together a diverse range of technologies, including solar, aquaponics, solar-powered centralized heating and cooling and sewage treatment, Eco-V’s GreenTower tech has the potential to serve large populations across a variety of locations, economically.

“The idea is to have a software platform that can accommodate any technology that fits into the business and financial model,” Nel explained to Microgrid Knowledge.

The company is also involved in projects in other countries in the African continent and the Middle East.

“We believe that the future of the economy of Africa is tied to the green economy. We need to be more sustainable.”