Community Supported Agriculture (CSA) aims to disrupt modern practices of mass production and revert back to simpler times — where the community takes pride in nurturing the food that the people within it will eat, ensuring it is safe and all the while supporting the farmer.

The idea of CSA advocates for a more direct relationship between the farmer and the consumer by allowing the consumer to subscribe to the harvest of a certain farm or group of farms. It is an alternative socio-economic model of agriculture and food distribution that allows the producer and consumer to share the risks of farming.

It encompasses three main objectives: to strengthen the relationship between citizens and farmers, to ensure participation in the income of ecological agriculture, and to improve the status of food safety.

The co-operative concept was brought to China by Dr Shi Yan, a farmer who studied at the Renmin University School of Agricultural Economics and Rural Development.

In 2008, she travelled to the US as an intern at Minnesota’s ecological Earthrise Farm and saw CSA in action.

When Yan returned to China, she was armed with new knowledge from her time on the American farm and started growing vegetables just outside of Beijing.

Inspired by the potential of CSA, she opened Shared Harvest in 2012 — one of the first farms in China to follow the CSA model — where consumers can buy organic, pesticide-free meat and vegetables directly from producers.

Shared Harvest is a membership organisation. It now has multiple farm locations, over 1,000 sign-ups and an annual turnover of more than 10 million yuan (US$1.45 million).

Fresh, organic, seasonal vegetables, all of which have been paid for upfront, get sent out in weekly boxes. The prepaid subscriptions help shield the farmers from instability and risks.

“This mode is very applicable to small and medium-sized farms that barely have funds at the early stage; on the other hand, sellers are producers themselves, so they directly face consumers and are more capable of being responsible for their own products,” says Yan. 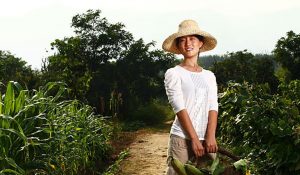 One of Shi’s principles is regular face-to-face interaction with her customers, who she invites to the farm to see how it works and where their food comes from. Children can come and take part in sowing seeds and harvesting the produce.

“A lot of people don’t know where their food comes from. It’s a world far away, but CSA is about relationships. It’s important for consumers to understand and build a relationship with farmers,” Yan told Aljazeera.

Building community is the heart of CSA — one that is prepared to pay a premium up ahead for the assurance that produce on the table is grown according to safe practices, is sustainable, seasonal, and as much as possible, free from chemicals and pesticides. CSA also offers the chance to meet with other like-minded members of the community who have the same passion and beliefs.

Yan’s love for her farms and community knows no bounds. She even got married on her main Shared Harvest farm carrying a bunch of broccoli instead of flowers as she walked down the aisle. 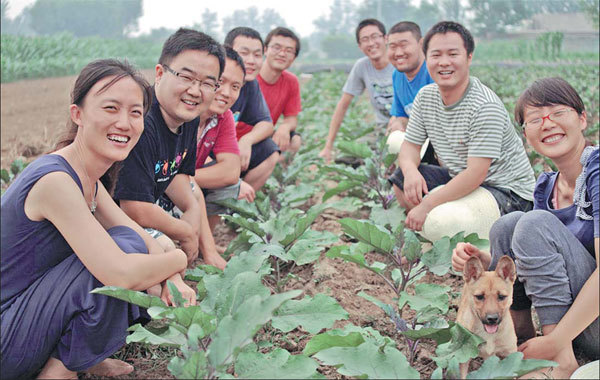 China has become well known for its unsafe food and labour practices, food safety scandals and lack of environmental consideration.

The agricultural industry took up widespread chemical use in order to increase and maintain food output to sustain a growing population. However, the environment, and ultimately the consumer, paid the price.

A variety of studies have found a link between pesticides and a wide range of health problems, ranging from headaches and nausea to cancer and endocrine disruption. American research released in 2009 showed strong links between agrichemicals and birth defects.

CSA provides a solid solution to these issues that the nation has woken up to by building a culture of trust around who is producing their food and how it was grown.

People are looking for healthier and more sustainable food and CSA farms can bridge that gap.

They also help customers get over their qualms with organic produce which can often look and taste different to the mass-produced and polished food that can be found in supermarkets.

“People have certain fixed ideas about organic or environmentally friendly products: that they should be small and ugly and blemished by insects; or attractive and nicely packaged.”

Supporting farmers and sharing the risk

Shi Yan is at the forefront of a growing group of farmers in China who are bucking the trend of young workers abandoning agriculture and being drawn to nearby cities like Beijing in the hope of making a better income.

Apprentice farmers at Shared Harvest earn around 3,000 to 4,000 yuan (about $370 to $630) a month, which is comparable to workers in second or third-tier cities employed in basic white-collar work.

When Yan started her CSA mission, the concept was still largely unknown in China. Today, Shared Harvest has inspired the opening of over 1000 CSA farms all over the country. Many of the farmers owning these farms have been apprentices of Yan.

The organisation also carries out food and public welfare education in many schools and holds a “new farmers internship” programme on the farm every year. Through the farm’s visits, nearly 100 public welfare lectures take place annually.

By helping bring young people back to the land and serving the growing demand for sustainable practices and organic food in China, Shi Yan has attracted worldwide media attention and won numerous awards for being an innovator in the country.

Farmers supported by their communities may be the answer to China’s concern over food safety, efficient land use and the unbalanced distribution of rural-urban demographics.

Unsold Expired Beer in Australia Is Being Turned Into Renewable Energy