The startup's zero-waste, reusable initiative has raised over $113k on crowdfunding site Kickstarter.

Radina Popova and Peter Zaharinov, co-founders of DiFOLD, have just raised over €100k ($113k) via a crowdfunding campaign on Kickstarter and are about to launch their first product into the world.

“The DiFOLD Origami Bottle saves you space and can go wherever you go. It fits the life you live, not the other way around,” Popova said, as quoted in Trending Topics. “We aim to create a new perspective on packaging. If we build a community of end-users who want to send single-use plastics into retirement, this will also attract B2B customers.”

The idea for the bottle reportedly came from Zaharinov, an architect interested in geometrical systems, who had previously created Praktrik—a line of puzzle furniture—and WallStack, a modular wall system. 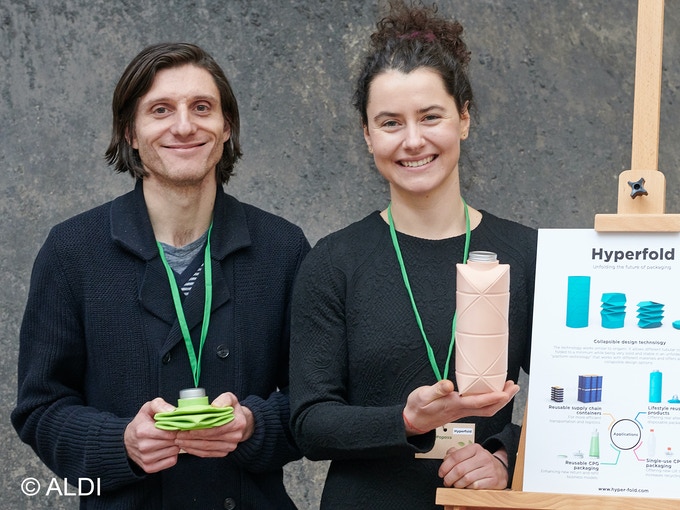 Peter Zaharinov and Radina Popova present their product to the supermarket ALDI. Photo on Kickstarter, by ALDI

The duo met while working on WallStack and were accepted onto an accelerator programme in Sofia, Bulgaria, with the focus on foldable designs in industries. They opted for reusable packaging, developing the idea for the origami bottle.

The design consists of geometric patterns that allow the tubes to become flat and take up 10 percent of their original space. The bottle is made of “bio-based thermoplastic polymer,” which the DiFOLD says not only allows the bottle to be used intensively for five years, but also means it can be recycled multiple times.

While the company is starting with reusable bottles, the suggestion is that the technology could be used for larger collapsible containers to make transportation more optimised. DiFOLD also has its eye on sales to large corporations.

“In the last year, we’ve finally started seeing efforts for zero waste shopping at scale, particularly in the more developed markets,” Popova and Zaharinov add. “Brands are increasingly implementing different types of innovative packaging that can be reused at least 100 times.

“Larger collapsible containers for the logistics industry are also a possibility but for now, we’re focusing on the origami bottle, and then we’ll see what will be the next verticals and products we pursue.”