AKUA's "kelp jerky" could be the sustainable superfood snack we have all been waiting for. Richard Branson seems to think so...

As we are collectively becoming more conscious of what we put into our bodies, and the effects that the pre-packaged junk we have so loved is having on the environment, start-ups are increasingly taking advantage of this and boosting their sustainable healthy offerings.

In recent years, kelp has been touted as a new superfood trend, down to it being full of vitamins, minerals, phytonutrients, amino acids, omega-3 fats and fiber, including zinc, magnesium, iron, potassium, copper, and calcium.

Seaweeds also support your body’s ability to absorb water and are an excellent source of iodine, which helps to support a healthy metabolism. In fact, seaweeds are one of the only foods that expand in your stomach, making you feel fuller longer.

Today, the global plant-based meat market is projected to reach $5.2 billion by 2020. Projections include seaweeds accounting for at least 15% of that—$750 million in the next two years.

Courtney Boyd Myers—a.k.a. “CBM”—is the founder of AKUA, a brand on a mission to become a household name for sustainable, seagreen-based foods. Fast Company named her as one of their most creative people in business in 2018. In April 2019, AKUA launched its first product “Kelp Jerky,” a 100% vegan and high-protein snack made with kelp, mushrooms, and superfoods. 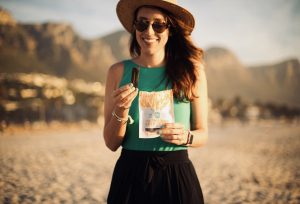 It has since received much promising press from the likes of The New York Times, Outside Magazine, Mind Body Green, and more.

Richard Branson, who has tried it, said, “I was prepared to come up with a nice response after eating this, but actually, it’s really rather delightful. It’s incredibly delicious.”

Their product which comes in three flavours is all made from ocean-famed kelp, which, according to AKUA, “is one of the most healing and healthy forms of food on the planet.”

CBM first dipped her toes in the world of seaweed back in 2016 when she became an adviser to GreenWave, a nonprofit that supports the regenerative ocean farming industry by encouraging underemployed fishermen to farm kelp sustainably, some of which she uses in AKUA.

Ocean-farmed kelp, which is a zero-input crop, requires no fresh-water, fertilizer, or dry land to grow. “We never wild-harvest kelp, which is detrimental to our ocean’s ecosystems,” says AKUA.

Its kelp is sourced from a network of New England ocean farms, which function as storm-surge protectors and shoreline ecosystems for 150+ species.

CBM is also a global community ambassador to Summit, an invite-only events company that hosts networking and inspirational gatherings for entrepreneurs, creatives, and other industry leaders. Over her five years with the organisation, she has helped to create events like Summit at Sea, Summit LA and Summit Tulum, which have hosted luminaries like Jeff Bezos, Malcolm Gladwell, Brene Brown, and Jessica Alba. She is also an investor in Unframed Ice Cream, a Cape Town-based vegan dessert company with its sights set on international expansion.

The strips of dried kelp and mushrooms are designed to have the same chewy texture and mouthfeel as one of America’s most loved snacks—beef jerky—and like jerky, there are 10 grams of protein in every a bag.

CBM, who first raised funds for AKUA’s Kickstarter last year, is currently rolling out a new round to help them scale up, “move out of their East Village Kitchen” and update their packaging to recyclable materials.

“It’s not always easy making the world a better place. But with your help and our kelp… we can do it together!”

Indian Scientists Have Developed a Low-Cost Biofuel From Micro-Algae

Photo by Andrew Buchanan on Unsplash
Did you know that seaweed soaks up 5x more carbon from the water than land based plants do from the air?
Previous
Share