Based in Guangzhou, China, Foodom is a restaurant manned by 46 different types of robot.

Named Foodom, the restaurant run by 46 different types of robot is located in Zhujiang New Town and mostly serves cuisine from Shunde, the hometown of its billionaire founder, Yang Guoqiang.

Customers are greeted by robot waiters at the entrance and using an AI-powered system, they guide customers to their seats, recommend specials of the day and take orders.

While there are other “robot restaurants” in China these bots are mainly focused on customer experience. At Foodom, robots also do things like receive deliveries, store produce, and select ingredients.

Food is prepared and cooked in the kitchen staffed by 32 robots and is delivered to the tables via a conveyor belt.

Curious customers can watch their meal being prepared by the robots through the glass window separating the kitchen and restaurant.

GizmoChina reports that the robots are “learning” their skills from the top 10 Shunde chefs, using a computer programme to follow every detail such as temperature control, ingredients, and cooking time.

The programme is frequently fine-tuned to reach a high precision level.

“The standardized computers can make the robots control the taste better than human beings,” said Lin.

Another local Shunde chef named Ma Huiliang gave the fried vegetables cooked by the robot kitchen at Foodom 90 out of 100 points.

He also assured that he isn’t worried about robots coming for his job in the future.

“On the contrary, it is a liberating opportunity for chefs when robots can cook,” he said.

“Chefs can focus their work on innovation and research for new food to better inherit and develop Chinese cuisine when robots can cook,” Ma added. 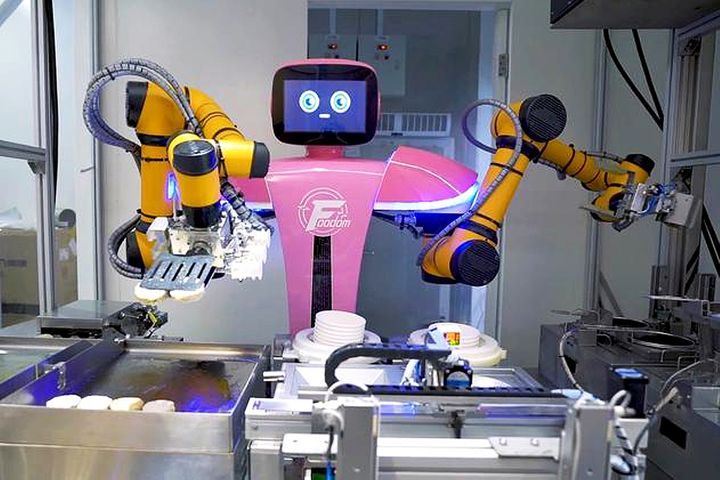 Founder Yang, however, doesn’t seem to be too concerned about the cost considering his firm sold more than 770 billion yuan ($111 billion) worth of properties last year.

Yang, who is the Patriarch of one of China’s richest families, is said to be planning to open 1,000 such robotic restaurants across China within two years, hoping to drive down costs through economies of scale.

Reuters recently reported that Country Garden is also planning to start mass production of construction robots next year in a bid to cut costs and raise efficiency.

They will be used to repair and build structures, which developers hope will also improve site safety.

The group started investing heavily in robotics research and development in 2018, promising to invest 16 billion yuan ($2.33 billion) in robotics each year for five years, after safety concerns following a series of incidents at its building sites that year.

Company president Bin Mo said at a media event that in the long run, Country Garden is targeting the construction of unmanned farms, and plans to provide a home service robot in each new home it sells.

This year Mo expects the company will buy more land than last in anticipation of more merger and acquisition opportunities. Country Garden’s attributable sales in 2019 grew 10% to 552.2 billion yuan ($79.6 billion).

Briggo Coffee Robots Could be Your Next Barista