Could Olli Rundgren's Game be the Antidote to Vaccine Hesitancy?

The game Antidote will be used in Finnish schools to educate kids about superbugs, vaccines and vaccination.

Vaccine hesitancy is proving to be a real threat to global health. The spread of fake news around vaccines and vaccination have seen the rates of people getting immunised drop while the death toll rises.

In recent years, we have seen a 30% increase in measles cases globally, with some countries that were close to eliminating the disease seeing a resurgence.

World leaders and public health authorities are on the hunt for innovative new ways to spread the word about vaccination, explain its huge importance and educate populations on the science.

“I was fascinated by how absorbing the game was, but gambling has its dark side and I knew I didn’t want to do it forever,” Rundgren told Vaccines Today.

So, from poker, he went on to study various branches of science including chemistry, physics, cell and molecular biology, physiology and pedagogy at the University of Jyväskylä.

His studies also included postgraduate research on the psychology and physiology of what makes activities engaging – and even addictive.

Now, he is combining his scientific knowledge with his obsession of understanding how games affect behaviour and learning.

Alongside the developer of the smash-hit game Angry Birds, he set up Psyon Games.

In 2016, the company started working with game designers and immunology and biopharma experts to create Antidote, a free fast-paced, strategic game for mobile phones based on real science.

Antidote: Battle of the Stem Cell is set under the microscope in a futuristic lab, and players must defend their stem cells against hordes of bacteria and viruses.

It compares itself to other games based on science, such as Kerbal Space Program, Cities: Skylines, and Civilization.

Rundgren has always been a gamer. Before getting into poker, he was an avid chess player as a child and then became a board game and computer game fanatic.

He says that this combined with his background in science and psychology “helped me understand the potential of games in shaping behaviour and, working with the right people, we’re applying this to health challenges.”

According to Rundgren, Antidote’s easy-to-understand game mechanics describe how adaptive immunity and vaccines work and may also prevent prejudices about vaccines.

His hope is that by using games, information and understanding will also be able to reach more difficult target groups, such as young men. 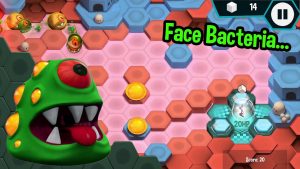 After winning a ‘Game of the Year’ award in Finland in 2017, Antidote was highlighted by the WHO as an example of innovative approaches to engaging the public.

Now, Finland’s National Institute for Health and Welfare is in talks with Psyon about testing the game in schools – and measuring its effects on vaccine uptake by using the population-based National Vaccine Register.

If permissions and funding can be obtained, a pilot project will be launched later this year.

Some schools in Finland will let their kids loose on the game as part of the country’s annual HPV vaccine education initiative, while other schools will educate kids about vaccines in the traditional way of using books and leaflets.

Researchers will then study the differences in attitudes and understanding between those who played the game and those who did not. Crucially, they will also be able to measure vaccine uptake levels to see if the game is better in increasing vaccine uptake than the existing approach.

The project is currently still in the planning stages. If it yields good results in the schools where it is being tested and receives sufficient funding, it could be rolled out more widely.

The Psyon team launched a crowd-funding campaign in 2016 to raise money and awareness of the game, which attracted support from a number of pharmaceutical companies including GSK.

The pharma giant is now using the style of the Antidote universe in a hepatitis information initiative.

The initiative’s announcement comes alongside recent research from Nature that found gaming could be used to tackle fake news — a phenomenon that vaccination has fallen victim to.

Psyon is also the creator of Trump Go, a game where you can literally hurl truth at US President Donald Trump.