Proving that one man's weeds are another man's wheels, Continental is making waves with their innovative rubber material derived from dandelions

What with COVID-19, lockdown, quarantine and the pressure to social-distance in all areas possible, many people around the world are turning to the good ol’ bicycle to get about. Not only are they a mode of transport that allows one to boost fitness while travelling in solitude, but they’re also one of the most sustainable ways of getting from A–B. But, like most things manufactured in our society today, the sustainability of bicycle production is being called into question.

A company ahead of the curve on this is Continental, a German tyre firm that, together with scientists from Fraunhofer Institute for Molecular Biology and Applied Ecology and the Institute of Plant Biology and Biotechnology at the University of Munster in Germany, have created The Urban Taraxagum — the first-ever bicycle tyre with tread made from 100% natural rubber derived from dandelions.

“Most people view dandelions as a nuisance. But here at Continental Tire, we embrace the flowering weed as a key component to the future of tires.”

As strange as it may seem to connect the common weed with tyre productions, a specific type of Russian dandelion contains latex with a high amount of natural rubber.

The scientists say that the dandelion rubber (which they are calling Taraxagum in homage to the botanical name for dandelion — taraxacum) produces tyres that are as high-quality as the tropical rubber tree, therefore, serving as a viable alternative.

Although natural rubber is a renewable product, global demand for rubber is constantly rising. In addition, the rubber tree only grows in latitudes between roughly 30° north and 30° south in Asia, Africa and South America – close to the equator in an area known as “the rubber belt.”

Plus, a rubber tree takes around seven years before it starts to supply latex suitable for processing. Continental says that at this point, the inherently slow pace of the system encounters the high speed of the market, leaving it facing highly volatile prices, monocultures in the producing countries and long transport distances before the rubber reaches their factories.

In contrast, latex is available from a dandelion’s roots just six months into the plant’s life with no genetic engineering necessary. And as everybody with a lawn or patio knows, dandelions are not fussy about where they grow and need next to nothing in way of care to thrive.

This means that Continental will be able to grow its own dandelion crops on wastelands close to its production sites worldwide.

On a good year, one hectare of dandelions yields one ton of natural rubber, which is comparable to the rubber tree.

“In agricultural terms, dandelions are an undemanding plant, growing in moderate climates, even in the northern hemisphere, and can be cultivated on land not suitable for food production,” according to Dr. Carla Recker, who heads the Continental team involved in the development of this super material. “This means that rubber production is conceivable near our tire factories, for instance, and the significantly shorter transport routes would also reduce CO2 emissions.” 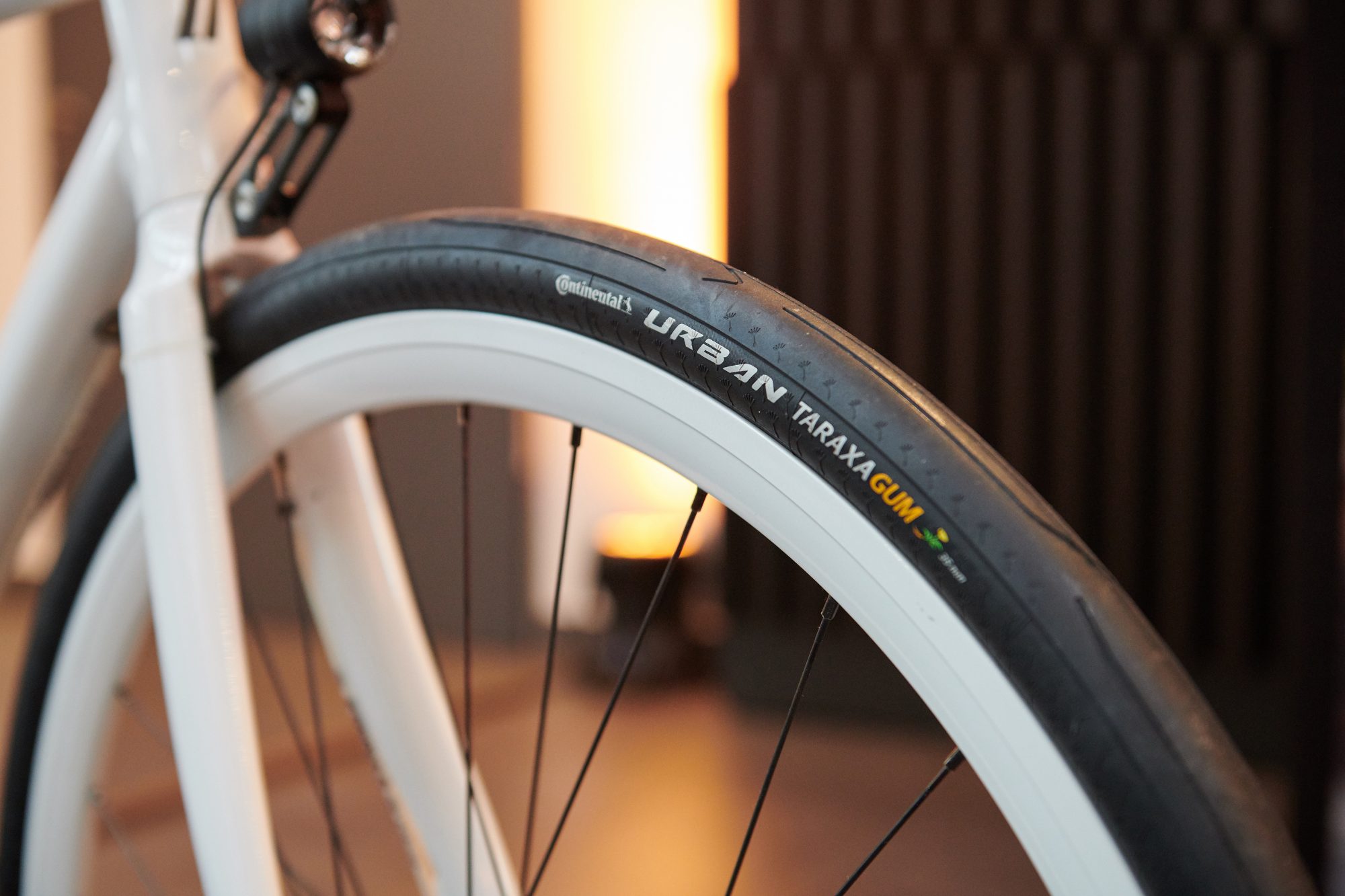 It was recently announced that The Urban Taraxagum bicycle tyre from Continental had won the Red Dot Design Award.

The company’s invention was also recently awarded the E-Bike Design and Innovation Award in the Sustainability and Green category by the magazine Focus E-Bike.

“We are delighted about the two awards,” said Thomas Falke, head of Continental’s business unit Two-Wheel Tyres. “They reflect the particularly successful design and sustainability of our ‘Urban Taraxagum’ bicycle tyre. In this way, our unique product made in Korbach is actively contributing to environmentally-friendly mobility and thus to greater sustainability.”

Claus Petschick, head of sustainability in Continental’s tyres business area, added: “Our dandelion rubber tyres are an important part of our extensive sustainability activities and of the ambitious goal of making our products and production processes as well as our research and development even more sustainable. Our efforts to cease importing the important rubber material from the tropics, and instead to manufacture it as close as possible to our tyre plants, will make a significant contribution.”

Earlier this year, the ‘Dandelion Bicycle Tyre’ was recognised with the IF Taipei Cycle D&I Gold Award and last year with the sustainability award from the e-bike manufacturer Accell Group.

Looking ahead, Continental’s long-term Taraxagum project will be to supply natural rubber from dandelion plants, which can be used for the production of two-wheel, passenger car or commercial vehicle tyres as well as other vehicle parts made of natural rubber.

The company has already produced the first test tyres for passenger cars and trucks and plans are in place to begin manufacturing consumer road tires made from dandelion-derived rubber in five to 10 years.

The Urban Taraxagum bicycle tyre has been produced in the Continental bicycle tyre plant in Korbach in the German state of Hesse for two years and is available both in-store and online.