With the goal of becoming a leader in the smart logistics and automation industries, the company's robots now build their own robots.

Founded in 2015, the company makes four kinds of AI-based robots—picking, moving, sorting and forklift systems—to create fully automated warehouses. Geek+ has deployed over 7,000 robots and completed over 200 smart logistics around the world.

Fully dedicated to automation, Geek+ has launched the world’s first smart factory, as 100 percent of the robots are made by other autonomous mobile robots.

“Smart factories will be a turning point for the entire industry as they provide a truly proven alternative to traditional, fixed production and achieve flexible production,” said Geek+ founder and CEO Yong Zheng in a company blog post. “What better way to show to the world the value of our solutions than to apply it to our own production? Our Nanjing factory is a window into the future of intelligent logistics and manufacturing.”

The factory is designed to produce over 10,000 robots a year. Its industrial robots use AI algorithms, a production logistics management system known as the “island production mode” and other automated programmes to build the robots. The production logistics management set-up—compared to the typical conveyor belt that’s normally associated with factory manufacturing facilities—powers all aspects of the factory to achieve a more efficient facility. 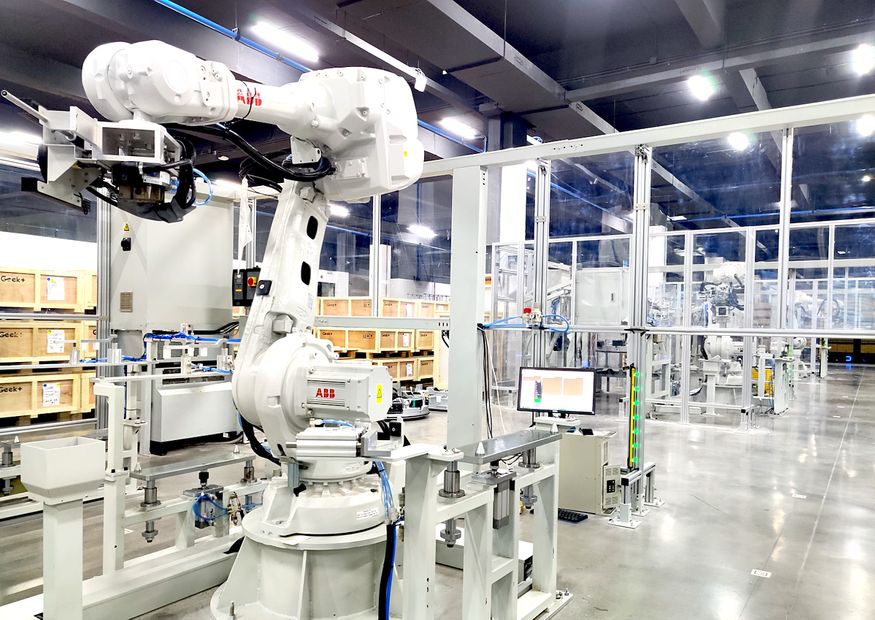 “In the past four years, we have already developed and implemented game-changing technologies for warehousing operations,” said Zheng, as reported by Abacus News. “With smart factories, we continue to pave the way for a truly intelligent supply chain.”

The robots even complete final testing and product inspection, after which they go to the finished product area to be packaged and prepared for shipping.

“I think we’ve done a good job combing technology with industry applications,” Zheng said. “How to sell it [intelligent logistics] to the consumer and gain even more trust, along with taking on our competitors – that is the challenge that lies ahead.”

Despite the success that Geek+ has shown, Zheng still has some reservations about the future of smart logistics, especially given the competition from German and Japanese manufacturers.

“Japan and Germany have strong industrial equipment and precision instruments,” said Zheng. “China is leading in AI technology though … we use software and algorithms to build good products and better solutions … as such, we have strong advantages worldwide.”