The latest in China surveillance tech is a wearable to keep tabs on kids' whereabouts.

China’s residents are no strangers to surveillance, which is recently becoming even more prevalent in the lives of Chinese youth.

The country is already using facial recognition in schools to ensure students aren’t playing truant, and technology to monitor how attentive students are in class.

Now, a district government in the southern city of Guangzhou in Nansha District is handing out free location-tracking smartwatches to around 17,000 students from 60 primary schools, according to Guangzhou Daily, in a bid to help parents supervise their children.

The wearables have been dubbed “Safe Campus Smartwatches” and are equipped with GPS and China’s own equivalent satellite navigation system, BeiDou.

The watch was developed by Guangzhou Haige Communication Group. Their senior engineer Zhu Yanjun says positioning is accurate to within 10 meters.

Parents are able to monitor their child’s location with their smartphones and are instantly notified if the child sends out an emergency alert. The smartwatches also have a waterfront warning system to prompt parents to pay attention when a child is close to a lake or river to prevent waterlogging accidents.

“As long as the child is not in sight, adults will be worried. The positioning function of this watch can greatly alleviate this anxiety. At the same time, it can improve the communication efficiency between home and school and better grasp the safety information of students,” says Li Mingqiu, the president of Jinlong Primary School in Nansha District which has received over 1,000 of the smartwatches.

The scheme has seen more than 8,000 users complete registration and the project plans to issue 30,000 more smartwatches in the coming months. 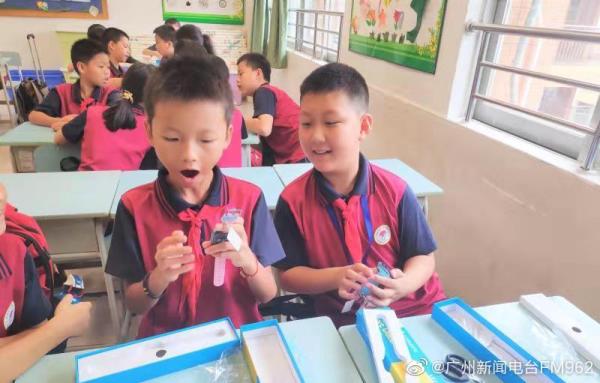 Authorities maintain that participation in the scheme is entirely voluntary and state that users’ personal information will be verified and stored in a database run by the police and the Ministry of Industry and Information Technology.

According to reports, the distribution of student smartwatches and the provision of safe campus services are part of projects aiming to demonstrate civilian applications for BeiDou throughout the country as an alternative to United States-owned GPS. The system, launched last year with 43 satellites in place, was originally created for the Chinese Military. Most Chinese-branded smartphones, such as those from Huawei and Xiaomi, already support BeiDou, though GPS still remains the most widely used system globally.

Past attempts to track school children in China, such as GPS tracking uniforms and tracking bands, have been met with controversy and social media outrage, but unlike these, this project in Guangzhou has official backing from multiple government agencies. This does not mean that all Chinese parents will be over the moon about Safe Campus Smartwatches but primary school president Mingqiu said that parents at his school were highly motivated.

While pictures of the school children receiving their wearables show them looking rather thrilled, we can’t help but wonder how they will feel about being under constant surveillance in 10 years time, and what that will look like in the future.

This Ring Uses a Fake Fingerprint to Protect Your Biometric Data