New weird and sometimes worrying applications of facial recognition appear to be cropping up in China every other week.

One of the latest uses might seem particularly odd. In Beijing, facial recognition technology is now being deployed in trash bins.

Why? The face scanners come as part of a nascent government-led scheme to make sure that residents are recycling properly.

A pilot programme in July this year saw 29 sets of “smart trash cans” installed at 16 points on Desheng Street, Xicheng District according to The Beijing News.

Before the smart equipment was put to use, all participating residents were registered and portraits were taken.

When the registered residents of the community are disposing of garbage, the trash can automatically scans their face to identify them. Once the bin has confirmed that the user is a resident, the lid opens and the recycled trash is weighed.

In addition, QR coded garbage bags help building management personnel figure out if the right trash has been dropped into the right bin. The coded bags are made handily available to local residents being sold in a vending machine near the bins.

Unregistered residents can also open the trash can with a button but only residents can benefit from a rewards system which gives out “credits” for exemplary recycling behaviour.

After the trash has been weighed, corresponding reward credits are assigned. Rewards include food and household products such as paper towels, salt and eggs.

Those who fail to sort their waste correctly are identified, though it’s unclear if there’s any ensuing punishment.* 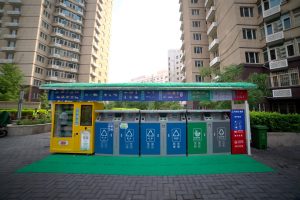 Sun Chunming, director of the Property Service Center of the Central Committee of the Communist Party of China, is responsible for the management of residential property. According to Chunming, there are more than 2,100 households in the partaking community, 50 percent of which are participating in the scheme.

The daily output of one of the smart bins is said to be about 5 tons of garbage, including around 1 ton of kitchen waste.

In order to reduce the cost of collecting and transporting kitchen waste, the bins are also equipped with a treatment facility to decompose it.

The installation of smart-bins in Beijing comes after Shanghai made it compulsory for people and businesses to sort their garbage into four types from July 1st 2019. Beijing is expected to follow suit.

The efforts are part of China’s national drive to increase recycling and reduce waste by 2020, an admirable goal but one many wish did not involve surveillance technologies like facial recognition.

Government-led facial recognition systems in the country are rapidly being increased in private spaces raising concerns over personal privacy and data security.

These are issues that the Chinese government seem much less concerned with than residents, although it was recently announced that facial recognition was to be curbed in schools following fuelled online debates and parents’ worries about their kids’ privacy.

* It must be noted that, in some Chinese cities, Jaywalkers receive a strange punishment for their crime: they are named and shamed on public screens when identified by facial recognition surveillance cameras then automatically notified and fined via SMS. Could a similar punishment be coming to neighbourhoods with rogue recyclers?*