Since the first 3D printer came to be in 1981, 3D printing has evolved to create objects such as spacecraft parts, entire houses, bathrooms, and human bones to carry out the world’s first middle ear transplant. 3D bioprinting has also demonstrated the potential to eliminate animal testing in medicine.

Nine scientists at Carnegie Mellon’s Regenerative Biomaterials & Therapeutics Group, under the leadership of co-first authors and FluidForm co-founders Andrew Lee and Andrew Hudson, have created an innovative method of rebuilding functional components of the human heart, according to the group’s study published in Science.

The researchers developed an advanced version of the company’s patented FRESH (Freeform Reversible Embedding of Suspended Hydrogels) 3D bioprinting technology, which is used to 3D print collagen with intricate complexity and construct pieces of the heart from blood vessels to valves to beating ventricles.

The 3D bioprinted hearts were based on human MRIs and accurately replicated anatomical structures. According to Tech Startups, the cardiac ventricles printed with human cardiac muscle cells demonstrated actions such as synchronised contractions and directional action potential propagation throughout the tissue.

“We now have the ability to build constructs that recapitulate key structural, mechanical, and biological properties of native tissues,” said Prof. Adam Feinberg, CTO and co-founder of FluidForm and principal investigator of the Regenerative Biomaterials and Therapeutics Group, as reported in a statement. “There are still many challenges to overcome to get us to bioengineered 3D organs, but this research represents a major step forward.” 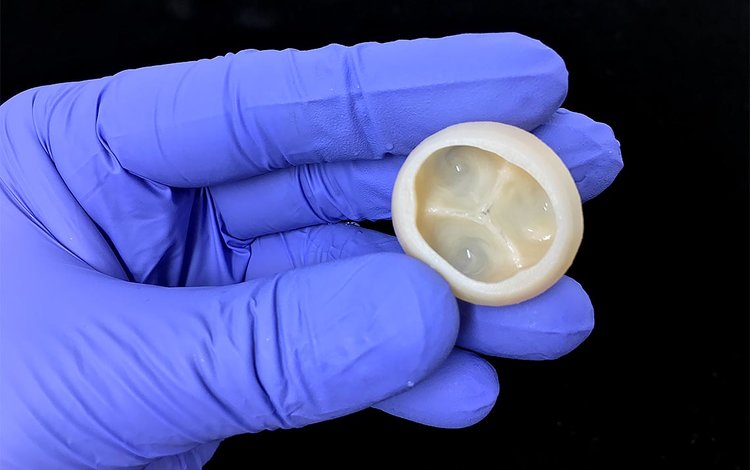 While it remains to be seen how the technology will be able to create the billions of cells needed to 3D print larger tissues and reach manufacturing scale, this accomplishment is a major step closer to being able to 3D bioprint fully functional organs.

Living cells and soft biomaterials have presented numerous challenges in the world of 3D printing. Prior to FluidForm’s patented methods, finding a means to support soft and dynamic biological materials during the printing process in order to achieve the complexity, preciseness and, thus, functionality of human cells has proved difficult.

FRESH technology is addressing this problem through its embedded printing approach. Through a temporary support gel, researchers can 3D print complex scaffolds using collagen in its native unmodified form, according to a statement from the company.

“FluidForm is extraordinarily proud of the research done in the Feinberg lab,” said Mike Graffeo, CEO of FluidForm. “The FRESH technique developed at Carnegie Mellon University enables bioprinting researchers to achieve unprecedented structure, resolution, and fidelity, which will enable a quantum leap forward in the field. We are very excited to be making this technology available to researchers everywhere.”