Bren Smith describes his journey from commercial fisherman to restorative ocean farmer as a “story of ecological redemption.”

At 14, Smith dropped out of high school and headed out to work on the seas. His first job was shooting seagulls and other bait-stealing birds, which he admitted was a pretty cool job for a boy of his age.

His career as a fisherman continued to be destructive, and Smith had little concern for the sustainability of the fish he was catching.

“I was working at the height of the industrialization of the oceans we were ripping up entire ecosystems with our trawls. We were using ever more efficient technologies to chase fewer and fewer fish deeper and deeper into the ocean.”

Smith, a young man with salt in his veins, loved his job and the thrill of being at sea. But, the destruction he and his shipmates were causing, and the fact that fish and ocean life was depleting before his eyes, soon became too much to bear.

After trying his hand in aquaculture at a large Salmon farm in Canada, Smith realised that it was more of the same destruction, achieved in new ways, so he kept hunting for sustainable ways to work the seas.

His journey for sustainability took him to Long Island Sound, a tidal estuary lying between Connecticut and Long Island, New York, where there was a program to lease shellfishing grounds to young commercial fishermen under 40.

“I leased 20 acres, started harvesting oysters and then slowly, with many experiments and failures, transitioned the farm into one of the first 3D ocean farms in the country,” he told the publication Future of Fish.

Instead of depleting the resources of the ocean, 3D farms restore them.

In 2014, Smith founded Greenwave alongside Emily Stengel, who has a background in sustainable food systems.

The non-profit describes itself as a new generation of ocean farmers feeding the planet and building a blue-green economy in the era of climate change. 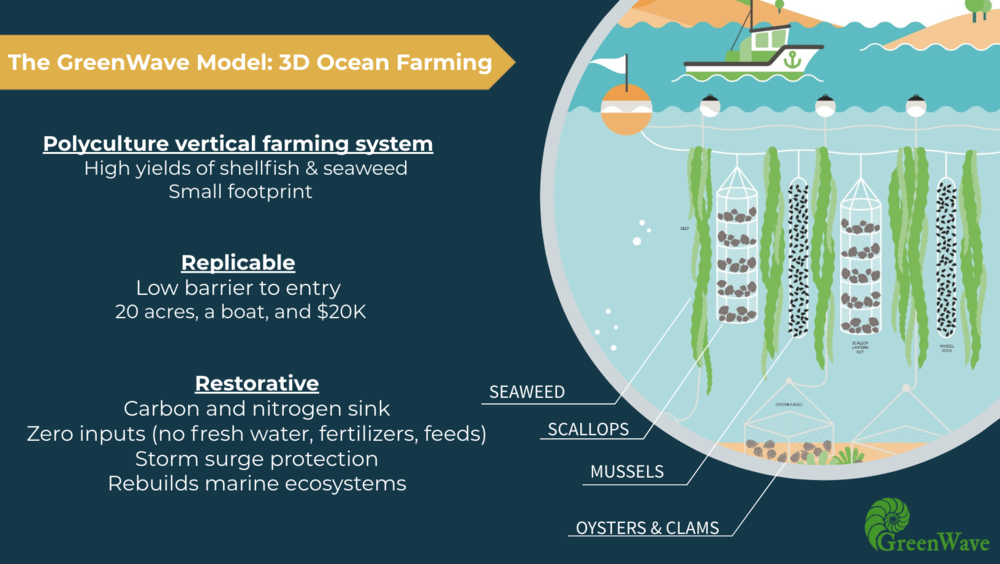 GreenWave’s polyculture vertical farming system grows a mix of seaweeds and shellfish that require zero inputs – making it the most sustainable form of food production on the planet – while sequestering carbon and rebuilding reef ecosystems.

Seaweed and kelp soak up 5x more carbon from the water than land-based plants do from the air.

“So I’m not just a fisherman; I’m a climate farmer,” says Smith.

Greenwave’s farms sit below the surface and leverage the entire water column, so they produce high yields with a small footprint.

Their crops are used as food, fertilizer, animal feed and more. 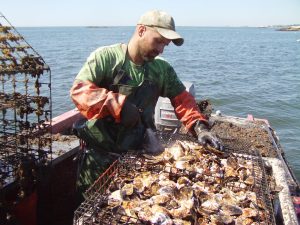 Addressing the problem of our exhausted food resources

Ocean farming has the potential to address the land-based food production crisis. We have to grow 70% more food by 2050 to accommodate 2 billion more people on the planet according to World Bank.

Land-based agriculture contributes 24% of global greenhouse gas emissions – more than transportation (11%) and just as much as burning fossil fuels (25%).

Kelp the superfood of the future?

When he started with his 3D farms and putting a focus on harvesting kelp, Smith says he was “getting laughed off the water” by his fellow fishermen.

“Kelp is a little embarrassing to grow for a fisherman, I chase and kill things for a living, and now I’m like an Arugula Farmer,” he admitted candidly in a video for Disruptive Innovation Festival.

While kelp may be “disgusting” in texture and flavour to most, it has recently become a superfood trend down to it being full of vitamins, minerals, phytonutrients, amino acids, omega-3 fats and fibre. It also includes zinc, magnesium, iron, potassium, copper, and calcium.

“By eating like fish, consumers get the same benefits, while reducing pressure on dwindling fish stocks.”

Today, the global plant-based meat market is projected to reach $5.2 billion by 2020. Projections include seaweeds accounting for at least 15% of that—$750 million in the next two years.

Greenwave is advised by “Kelp Queen” Courtney Boyd Myers, who also uses some of the non-profit’s kelp to create Akua, a trendy and sustainable superfood snack which has received a seal of approval from the likes of Richard Branson. 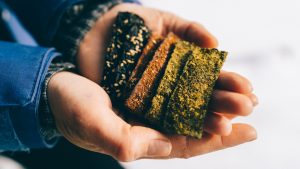 Smith believes that anyone who dares call themselves a chef, better be able to make something nutritious and delicious with kelp.

Previously, GreenWave has worked with chefs to experiment with fun ways to use kelp as food (like noodles, ice cream, and cocktails) and innovators to develop sustainable, commercial uses for kelp as fertilizer, animal feed, and more.

Greenwave’s farms are open source. They say that anyone with 20 acres, a boat, and $20K can be up and running within one year.

Bren Smith was named one of Rolling Stone magazine’s “25 People Shaping the Future” and featured in TIME magazine’s “Best Inventions of 2017.”

Earlier this year, the innovative fisherman published Eat Like a Fish: My Adventures as a Fisherman Turned Restorative Ocean Farmer — part memoir, part manifesto with a few kelp recipes thrown into the mix.