Created by researchers at Stanford University, the BodyNet device sticks to the skin like a band-aid and can detect movement, heart rate and breathing.

Stanford University scientists have created an innovative wearable device known as BodyNet that can track movement, heart rate and respiration and sticks to the skin like a band-aid. The device then beams wireless readings to a receiver clipped onto clothing.

The human skin is the body’s largest and heaviest organ. Our fascinating outer layer in which all of our other parts are encased in, mainly acts as protection by creating a barrier between our insides and the outside world.

The skin, however, does a lot more than just protect.

Additionally, the skin can be a great indicator of what is going on with our bodies internally, providing a window into our physical and emotional well-being.

However, devices that use the skin to get a picture of what is going on inside are no new thing.

Polygraph machines, more colloquially known as lie detectors, employ sensors attached to the body to detect heart rate, perspiration and breathing. Increased activity in these bodily functions can help indicate whether a person is lying or not.

However, these devices require a person to be hooked up to wires, batteries and machines, whereas BodyNet does not.

Designed by Zhenan Bao, a professor of chemical engineering at Stanford University, in California, and her team the BodyNet device is a patch that sticks to skin like a band-aid.

Prof. Bao and her team published a paper about the findings of their wearable tech device in the journal Nature Electronics, describing it as “a body area sensor network (bodyNET) is a collection of networked sensors that can be used to monitor human physiological signals.”

How does it work?

By applying the device to a participant’s knees and elbows, the researchers were able to know when a person moved, as the patch can detect stretching and contracting of the skin.

By sticking the sensors to the wrist or abdomen, they could detect the participant’s pulse and breathing.

The battery-free sensors transmit their signals with a form of RFID (radiofrequency identification) whereby small amounts of energy are harvested from a receiver clipped to clothing. The receiver then uses Bluetooth to upload the physiological data to a smartphone or any other wireless device.

RFID is a technology that is also used in keyless access systems and key cards.

The researchers first used metallic ink to create an antenna to transmit RFID energy, but they soon found it was not strong enough.

As a solution, the Stanford scientists developed a new type of RFID system to beam reliable and accurate signals to the receiver. 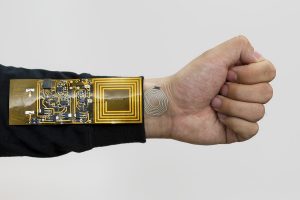 BodyNet sticker and receiver
The rubber sticker attached to the wrist can bend and stretch as the person’s skin moves, beaming pulse readings to a receiver clipped to the person’s clothing, as part of a wireless health-monitoring system called BodyNet. / Photo by Bao lab

The researchers believe that BodyNet could be used by healthcare professionals to monitor patients with sleeping problems and heart conditions.

Seeing as the sensors require no wires, batteries or other external equipment, they could be perfect for long-term and comfortable wear, allowing for real-world evidence data to be harvested over long periods of time.

The team is now trying to figure out how the patch can also be used to detect sweat and body temperature.

“We think one day it will be possible to create a full-body skin-sensor array to collect physiological data without interfering with a person’s normal behaviour,” said Bao.

Bao is one of many scientists dedicated to creating artificial electronic skin that is non-invasive and has multiple applications.

In 2015, she was selected as one of Nature’s 10 People Who Mattered in 2015 for her pioneering work in this field.