Blync: VR Tech Allows You To Cycle In Virtual Worlds

Seemingly designed for coronavirus lockdowns, Blync pairs a VR headset with a static bike for a thrilling virtual exercise experience.

For people unable to leave their house, an exercise bike is a useful way to stay in shape. But staring at a wall—as any exercise bike owner will tell you—gets old. Fast.

So what if you could experience the thrill of rushing down a forest path, or zooming along a beachfront, while still doing exercise from the comfort of your own living room?

This is the question that has long inspired software developer Izu Okongwu. And after years of design, he’s found an answer.

Blync pairs the immersive environments of virtual reality (VR) with the ease and comfort of indoor exercise.

As set out in an ongoing Kickstarter campaign, it works by fixing the back wheel of an ordinary bike in place with a ‘bike trainer’, and resting the front wheel on what looks like a mouse pad with a large groove in the middle.

This moulded item is Blync’s path sensor, which detects where the bike’s handlebar is facing and transmits this information into the virtual world. It’s designed to fit any size of bike wheel, so the tech is equally appropriate for kids and adults. 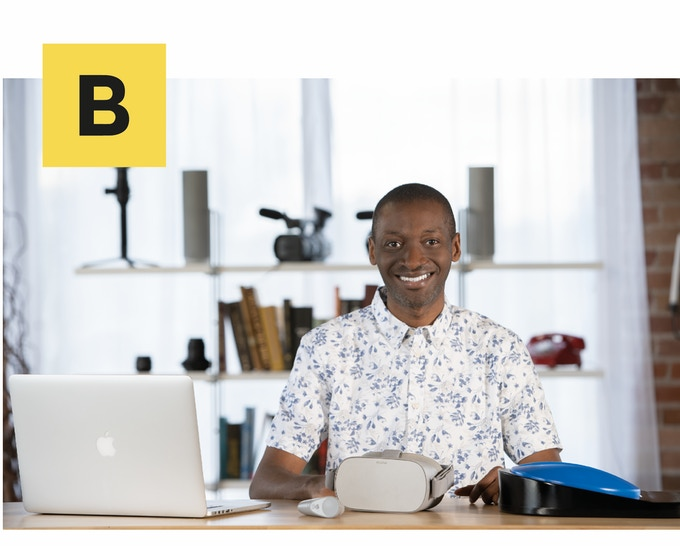 On the back wheel, a speed sensor is attached to see how quickly the user is pedalling.

Users then connect their VR headset to an associated app and get playing. They customise their avatar and bike then set off in different environments. The pre-programmed worlds include a wooden village, a forest path, a medieval town, and a beach-side filled with ramps and jumps to play around with.

Izu’s passion was supported by a background in software systems design, having spent four years as Senior Software Engineer at OpenText in Ontario, Canada, and ten years as a Software Developer at Research in Motion.

The main selling point for Blync is that it keeps you active, and means that you don’t have to cancel cycling during winter — with users able to ride their bike at any time of day, or season in the year. Even during a coronavirus lockdown.

It has also developed a way for people to avoid dizziness during motion, by toggling between first- and third-person mode. In addition, they could choose to look at computer screen or laptop instead of using the VR headset.

“It was when I tried VR for the first time that I understood how immersive it could be,” Izu said, in a video on the Kickstarter page. “It got me thinking about different ways it can trick reality.”

Blync comes amid a wave of tech solutions mixing augmented or virtual reality with exercise. Startup Ghost Pacer has also just completed a crowdfunding campaign for an AR racing buddy that would run slightly ahead of the user to encourage them to go faster.

It also follows an incredible experiment by tech pioneer Jak Wilmot, who spent an entire week inside Virtual Reality. He found that VR can be a wonderful way to escape from the mundane, and even live spiritually — but that your brain needs to be reminded about day and night in order to stay sane.

This Man Spent One Week Living In Virtual Reality. Here’s What He Learned