Bioniks: Turning Kids with Prosthetics Into Superheroes in Pakistan

The Pakistani company’s 3D-printed, lightweight limbs are much cheaper and accessible than regular prosthetics.

There are few things more rewarding in life than turning a perceived weakness into a strength.

And that’s exactly what healthtech startup Bioniks is doing for children in Pakistan, UAE and Bangladesh.

Set up by Anas Niaz and Ovais Hussain Qureshi, two mechatronics engineering students at Karachi’s SZABIST University, Bioniks is Pakistan’s first bionic limb startup. Its aim is to provide kids with lightweight and affordable prosthetics to let them “take control of their life again.”

What’s different about Bioniks — the really special thing — is that their lightweight, affordable limbs are designed to look like parts from superheroes.

“[Kids] can choose hands based on their favourite characters from Spider Man to Bat Man to even Barbie,” Qureshi told Gulf News. “Kids who were often asked, ‘What’s wrong with you?’ are now the centre of attention. People are fascinated, ‘Wow that’s such a cool arm! How does it work?’ This change is itself a major boost.”

Since 2016, the company has made 3D-printed prosthetics for more than 35 people in Pakistan, UAE, USA and Bangladesh. 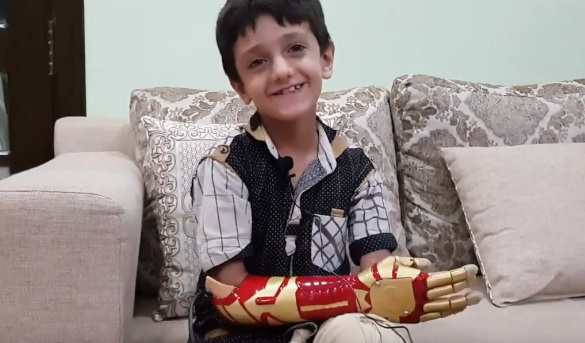 One such child is Bilal Amin, a seven-year-old whose hands had to be amputated after experiencing a high-voltage electric shock while playing with his siblings. After a 30-day stay in a hospital burn unit and spending PKR 1 million ($6380) on hospital bills, surgery and medication, Amin’s family still couldn’t find the right sort of prosthetic.

Enter Bioniks — which the family saw as an “answer to our prayers.”

The family visited Karachi to get Bilal his robotic arms. After a couple of rehabilitation sessions, they watched their son, now clad with an Iron Man-style arm, successfully pick up keys and a ball from the floor.

“I can’t describe how happy he was,” Amin’s father said. “Seeing him pick something up after months was a feeling beyond words.”

Bilal told Gulf News that he “loved Iron Man. Now I am one.” The hand he’s been given also lights up like his favourite superhero, accompanying him as he plays and even paints.

“Robotic arms were one of the products during our final semester project, but we decided to focus on bionic limbs to address the needs of thousands of children at lowest possible cost,” Bioniks CTO Anas added to Gulf News.

Their bionics — electronically powered, unlike conventional prosthetics — work by picking up signals from the same muscles used to make a biological hand work. The limbs can just be added on to the arm; no surgery is required, and the arm can be taken off easily.

Because their prosthetics are 3D printed, the team say they weigh only 200 grams for a child’s prosthetic arm, compared to the 1,500 grams for a traditional prosthetic. Similarly, the cost is just $2,000, compared to the $5,000 to $50,000 for regular prosthetics. “Our goal is to make bionic arms accessible to all in need, especially children,” Ovais says. The first 10 of the 35 bionic arms were free of cost, given over a million people in Pakistan are already affected by limb loss and many are unable to afford any kind of prosthesis.

In the future, the idea is to develop lower body limbs and even robotic exoskeletons for people living with spinal cord injuries. The two founders have to date funded activities with other products — including personalised 3D-printed models derived from scans that can be used for surgical planning or medical case studies, and prosthesis for animals — but they have their eye on grants and funds to support further research and development.

For Amin’s family, the most important impact of the superhero prosthetic has been the child’s mental health. The family was troubled to see the boy “so sad and lonely,” with no desire to go to school or see his friends. “And now he can’t wait to show them his new arm.”