Created from upcycled and recycled materials, the Sheltersuit includes a waterproof and windproof bodysuit with an easily attachable sleeping bag.

In 2014, Dutch fashion designer Bas Timmer was struck by the news that a close friend’s father had died on the streets due to hypothermia after being made homeless.

The tragic news inspired him to do something to help.

At the time Bas had started his own outdoor, cold-weather clothing line after attending fashion school. But it didn’t feel right for him to sell fashionable clothing at a high price while many people couldn’t even afford warm and protective clothing to simply survive.

His first idea was hoodies for the homeless, but after considering what someone on the streets really needs to survive, he changed track.

Designing around the requirements for life on the streets, he knew that his garment needed to be waterproof, warm, portable and good for sleeping.

A part-tent, part-parka hybrid, Timmer’s prototype featured a detachable sleeping bag that could be zipped off and easily stored during the day in a matching backpack.

He presented it to a local homeless man who absolutely loved it.

So much so that he shared it with a few of his friends that winter, each taking it in turns to wear the suit for a night.

When Timmer’s business partner Alexander de Groot came across the same man a few months later and asked where the suit was, he was blown away to hear that someone who had nothing would be so willing to share something of such great value to him.

The pair became extra motivated by seeing what kindness could do and decided to deliver more of what they came to call “Sheltersuits.” 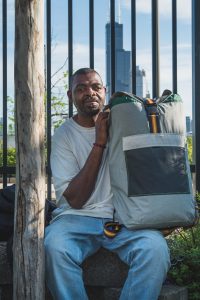 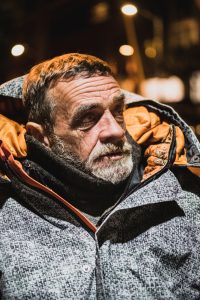 Six years on, Timmer is still changing lives by handing out Sheltersuits. He was recently named one of Time’s Next Generation Leaders.

So far, through the Sheltersuit Foundation, he has distributed 12,500 to homeless people in the UK, the Netherlands, Germany, Italy, the US, and to refugees in Greece.

He has modified his designs to better suit some of the international communities he is reaching, using less insulation in warmer areas and adding a detachable scarf for colder environments. He has also inserted Velcro closures at the foot of the sleeping bags, so that wearers can free up their feet after being told by homeless friends that it would be useful, especially in areas where the homeless are routinely harassed by police and often need to make a quick getaway. 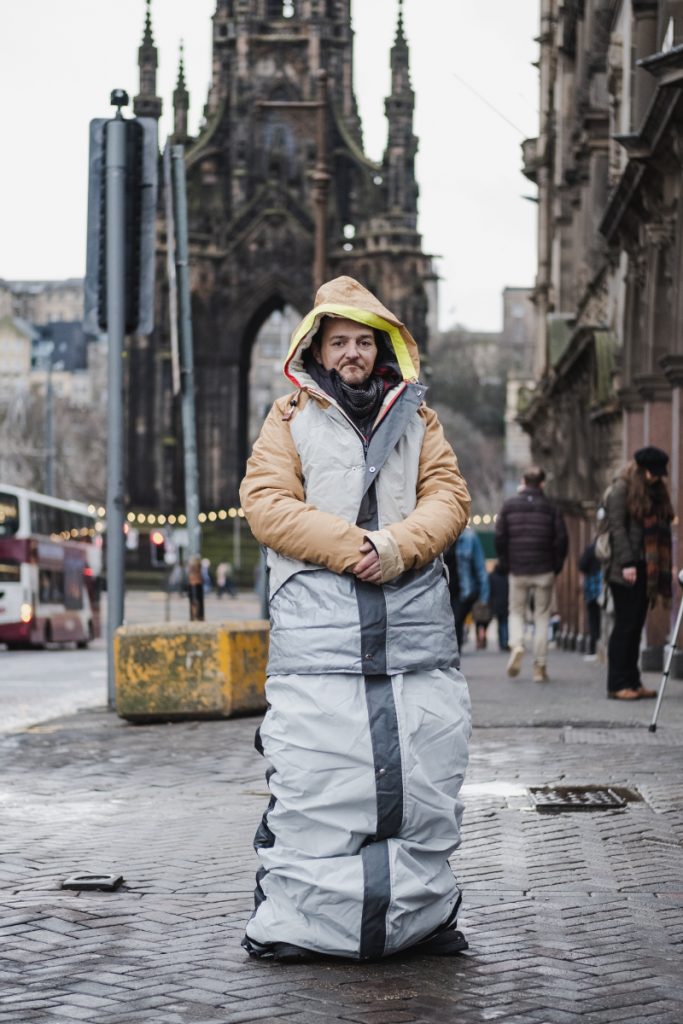 The suits are made out of donated and upcycled materials, including excess tent material and sleeping bags. Manufacturing costs are covered by donations.

To further keep costs at a minimum, Timmer is expanding to South Africa, where he has partnered with UNICEF to produce the suits for worldwide distribution at much lower costs—around $30 a piece, Time reports.

Sheltersuit products are made by volunteers, formerly homeless people, refugees and the unemployed (some of the workers are paid). Members of vulnerable communities receive further support in the form of food, job coaching or cultural integration into Dutch society, in the case of refugees in the country.

Timmer’s goal is to open similar small factories all over the world, empowering local communities by sharing the design and teaching people how to make the Sheltersuit while giving them a livelihood in the process.

“By giving local entrepreneurs and humanitarians the tools necessary, we can empower them to multiply the ‘Sheltersuit Effect’ and the global mission that every person no matter where they are from has the right to warmth, protection, and dignity.

“Sheltersuit will facilitate this movement with knowledge and experience and by utilising our brand value and network. This is how we create local impact, with worldwide ambitions. By creating an international movement we are turning our beliefs into impact and reality.”

Ample Labs is Using Tech to Empower the Homeless in Toronto