Documentary Shows the Reality of the Apartheid, 60 Years Later

"Gugulethu 60" in the Running for Top International Award

Gugulethu 60, a documentary about the present-day impact of the South African Apartheid, has received global recognition at the 2019 Focal International awards, “the leading and most complete set of awards for the archive footage industry in the world today.”

The 17-minute film has been nominated for Best Use of Footage in a Short Film Production. The awards show will take place next month at The Troxy in Stepney, London.

“This is remarkable as it simply says that the story of Gugulethu township will be mentioned on an international stage,” said Phumzile Nteyi, director of the project, as reported by IOL. “This in return will change the negative perceptions about townships as places for crime and many other social ills that are always portrayed by the media in general. It is time that Gugulethu reclaim its pride as it is the second oldest township in Cape Town.”

Gugulethu, previously known as Nyanga West, is a township around 11 miles southeast of Cape Town, South Africa. The area played a central role in both Apartheid and the country’s political history. In 1958, the first two families were displaced to Gugulethu, and several more from Kensington, Athlone, Retreat and Simons Town followed. In 1976, politically inclined youth fought against the injustice of Bantu Education. However, the nationalist police force fought back with tear gas and bullets, results in the deaths of several students. In the mid-1980s, seven men under the age of 23 were murdered by the South African police, as the Apartheid government deemed them as terrorists. This incident attracted worldwide attention, the men were hailed as struggle heroes by their local community.

The film follows the above events and more, such as the murder of Amy Biehl and the development of democracy in the 1990s. Several interviews and stories are featured in the documentary, from doctors and businesspeople to a former Umkhonto we Sizwe veteran and filmmaker. Perspectives from current residents of the town are also expressed, as they want the world to see how much Gugulethu is thriving, despite its tumultuous history.

“When people think of Gugulethu, they think about the killing of the Gugulethu Seven by the Apartheid Government in the 80s or they think about the murder of Amy Biehl,” said Geoff Mamputa, Gugulethu resident and social activist, as recalled by the City of Cape Town Museum. “Gugulethu’s history holds much more than these two tragedies.” 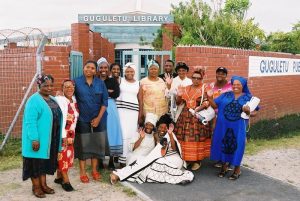 “We will represent the country and put the township on the map,” said Nteyi, as reported by IOL. “We want other townships to do the same and not let other people tell our stories in their perspectives. It’s time for Cape Town townships to change stereotypes and let the world see we have a lot more to offer than poverty and crime.”

Numerous entities were involved in this project, such as The African News Agency and the Independent Media Library at the University of Cape Town, Robben Island Museum, and the Mayibuye Archives.