The NGO operates in one of the driest and least populated areas in Europe, helping society move “from an ego- to eco-economy.”

Spain is a country with everything. Lush greenery. Picturesque coasts. Snow-capped mountains and sun-kissed lakes.

But unrestrained climate change is tearing a hole in this delicious diversity. Where once winter lasted an entire season, it now trickles by two months late. Where once temperatures peaked at 30 degrees, they now push 50. Where once farmers could rely on steady rainfall, the earth now rasps out in pain.

The spread of a semi-arid climate is most pronounced in the South East of Spain, including the regions of Granada, Almeria and Alicante. Rainfall here is just “200 to 400 milimetres per year,” according to Dietmar Roth, the Project Coordinator at the environmental NGO AlVelAl. As someone who has spent the past two decades living in the region and studying the earth, as an academic, local council representative and charity worker, he knows just how bad this is.

“When I started to live here about 26 years ago, we had three of four snowfalls a year. Now if we have one, it’s a lot,” he told GS.

“People are aware that if we don’t change our ways of farming, we won’t have a good future in 60% of Spain. There’s a real threat of desertification across the South and South East of the country.”

It was in response to this threat that AlVelAl was born. In 2014, major Dutch NGO Commonland was looking to back a large-scale restorative project in Spain. Out of 50 proposals, they chose AlVelAl, citing the scale of the challenges in their operating area.

AlVelAl has used this funding, and support from green search engine Ecosia, to plant 50,000 trees. Traditional methods and even drones are used to connect the five natural parks in their area, with an “ecological corridor” to match the “great green wall” across the Sahel.

But the charity’s main focus is on restorative agriculture and a 4 returns policy across 125 partner farms, covering roughly 12,000 hectares.

Ecosia: The Search Engine Planting Trees While You Surf the Web

“We started in the beginning of 2015 to work centred on the soils,” Roth told GS. “People always think about the water. But really the most important thing for us is to protect and enhance soil fertility and stop erosion, and to achieve better biodiversity and very differentiated agriculture like mosaic cultures — and to integrate different types of crops or livestock here in the South East.”

Roth says that every year, farmers in the area without protection lose 100 years worth of naturally-occurring soil. This has massive implications for water retention and crop protection.

To tackle this, AlVelAl helps design water systems in farms in an intelligent way to prevent water runoff. They develop natural zones for pollonisers on the farms, which Roth says brings natural enemies to farm plagues and increases productivity by 20-30%. They run commercial programmes, like La Almendrehesa, helping farmers yield higher quality products, and to sell these to selected international buyers willing to pay more.

In addition, Roth and his team are helping farmers move away from heavy machinery and industrial use of pesticides — instead returning to the sustainability of a “really good agricultural tradition we had here for more than 1,000 years.” 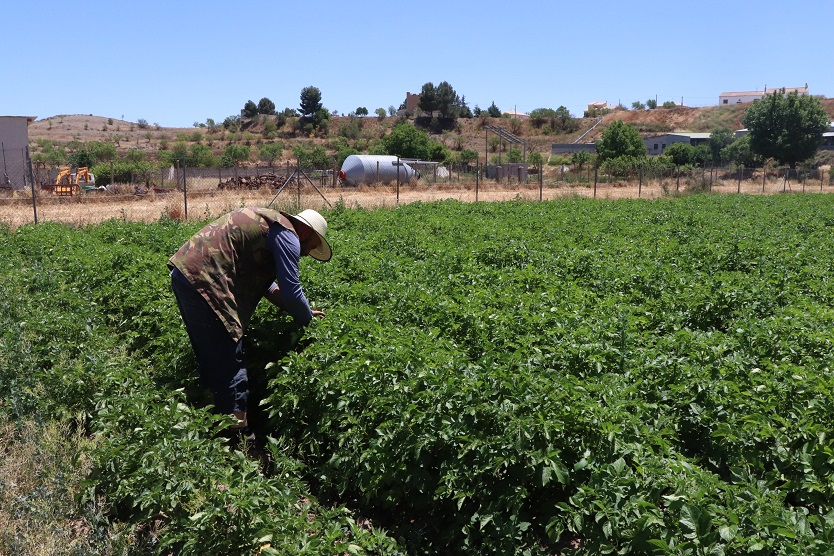 Working with a partner farm. Photo by AlVelAl

The AlVelAl project is particularly revolutionary for two reasons: its scale and focus.

The vision for environmental restoration takes place over a 20 year time frame, rather than the four years tied to election cycles, or the six year cycles common to European funding. “If you want to change minds — and have a positive change in society — you need more than a generation,” Roth says.

AlVelAl also has a holistic approach to agriculture, which stresses that the environment, society and the economy are all integrated. “We need to go from an ‘ego’ to ‘eco’ economy,” Roth added. “To think about new ways of economy — common goods, and all the movements to make development sustainable. Especially in rural environments with damage from climate change and agricultural practices over the last 20 or 30 years.”

Roth offered a shocking statistic about the challenges for the future: depopulation has left just three inhabitants per square kilometre in the area where they work. That’s less than Lapland.

“If we want to ensure that many people don’t go to the big cities and leave the agriculture behind, which would have a deep impact on ecosystem services, we have to bring to them more income, better work conditions, and diversification of the economy and rural areas.” 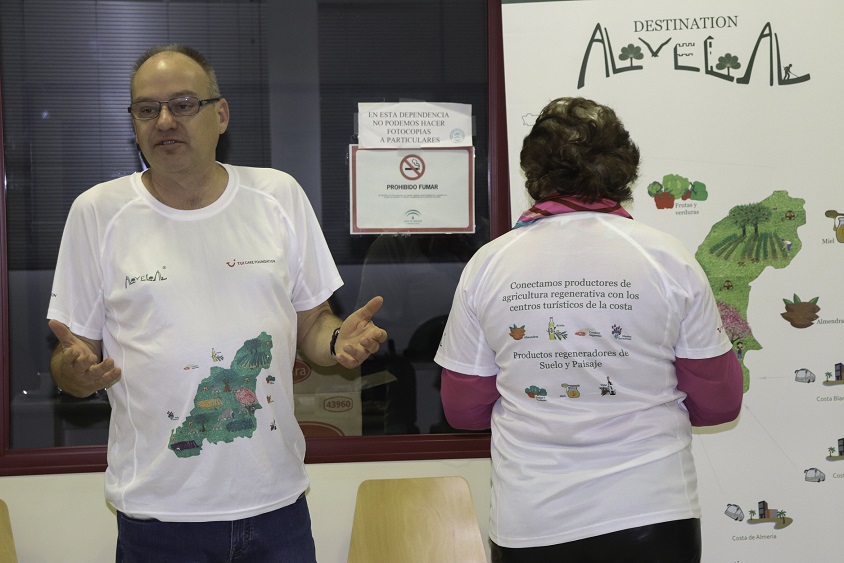 Dietmar Roth and a colleague delivering a ‘Destination AlVelAL workshop’. Photo by AlVelAl

To this end, Roth is passionate about securing better prices for farmers. He’s convinced this can be achieved through new forms of certification for products created through restorative agriculture techniques. “It’s a very important step to promote these products, because it also happened with organic products,” Roth said. “Until you have certification it’s harder to get better prices or to make sales.”

There’s also a big focus on eco-tourism. AlVelAl has partnered with Tui, the largest tourist group in the world, to bring some of the 90m tourists who visit Spain each year inland, where they can “respect local traditions, local environment, and local culture.”

“We have to make different proposals and make people conscious that if you go on with bad practices, you will make this area uninhabitable.

“Let’s try to protect our environment.”