Combining a love of beer with a love for the planet, these brewers keep the environment in mind.

For centuries, beer has been one of the most loved beverages on the planet. In fact, beer is the oldest recorded recipe in the world. The ancient Egyptians first documented the brewing process on papyrus scrolls around 5,000 B.C.

Despite shifting tastes and the rise of non-alcoholic drinks, beer remains the most popular alcoholic beverage in the United States. In 2017, beer makers shipped a whopping 26.4 gallons of beer per American adult, and there is little sign of this huge industry slowing down.

Like most industries, though, the business of beer contributes to environmental damage and global warming with plastic packaging, food and water waste and carbon emissions from the production and shipping processes.

But, we don’t want to bum you out on National Beer Day!

The last decade has seen the rise of craft breweries and artisan beers, and many of these small and often family-run businesses are showing their dedication to being light-footed on the planet through numerous innovative avenues that cut down on polluting processes.

Here are six beer brands to look out for if you fancy a guilt-free pint: 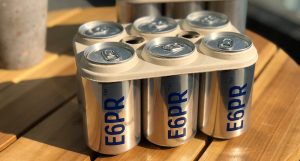 We have all seen those heartbreaking images of wildlife painfully stuck in six-pack rings — an item whose only function is to make it easier for us to transport cans around.

One day, Chris Gove, Dustin Jeffers, Peter Agardy and Bo Eaton, the founders of Saltwater Brewery, a microbrewery based in Florida’s Delray Beach, had enough.

The ocean lovers were tired of seeing plastic polluting the seas and decided that they did not want to be part of the problem, but rather finders of a solution.

With the help of Entelequia, the leading biodegradables supplier in México; We Believers advertising house; and a bunch of private investors in the brewing and packaging industries, E6PR was born in 2017 with its headquarters in Mexico.

E6PR is an acronym for Eco Six Pack Ring; the company has created the world’s first made-from-by-product waste and other compostable materials that are safe for marine life to eat. In fact, they use the spent grain from Saltwater’s brewing process to create the product. Now that’s circular economy! 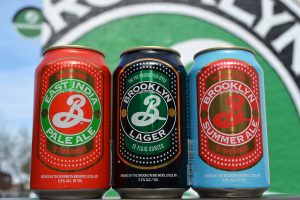 The brewery doesn’t have the means to produce wind power on-site, so it draws the energy from a wind farm in upstate New York.

In addition, Brooklyn Brewery pays New York and New Jersey dairy and livestock farmers to take away its spent grain to feed to their animals — so it doesn’t end up in landfill.

In 2013, Brooklyn Brewery even set up its own ‘Green Team’ to ensure sustainability in every part of the business and in every pint. 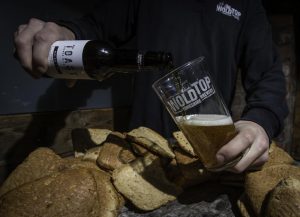 Toast Ale is a brand that brews beer from surplus bread. When he set up the company, Tristam Stuart challenged the market to put him out of business by eliminating food waste.

Toast Ale collects leftover bread from businesses, restaurants and hotels in the UK and incorporates it into the brewing process with hops, water, yeast and barley.

The social enterprise then donates all of its profits to FeedBack, a British charity (also founded by Stuart) committed to combating food poverty and wastage at each end of the food production process.

Beau’s is a family-run craft brewery, located East of Ottawa in a small town called Vankleek Hill in Ontario, Canada.

Then, in 2014, Beau’s also became the first craft brewery in Canada to choose 100% green energy for both electricity and natural gas needs.

The brewery also uses beer labels made from 100% post-consumer recycled paper. Its award-winning 4-pack of beer contains 17.3% more beer, yet uses fewer bottles, caps and labels and less packaging than an average 6-pack.

Since 2006, Beau’s has donated more than $1 million to charities, community groups and the independent arts. 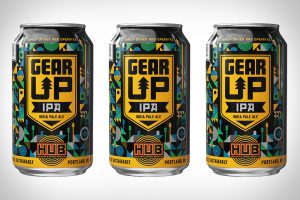 Hopworks was founded in 2007 by Christian Ettinger, who started brewing in his parent’s kitchen during his first summer break in college. It didn’t take long for him to decide to open his own brewpub. Like many of Portland Oregan’s great brewers, he started his career at the Eugene City Brewery.

The company has a strong community focus. It donates 1% of its Powell location brewpub pint sales to local charitable organisations and works with local companies, such as Urban Gleaners and Organic Valley Coop, to distribute usable food and reusable materials.

Hopworks reduces its environmental impact by ensuring that 88% of its grain is grown less than 300 miles away, in the Klamath Falls area of Southern Oregon.

The brewery sends over 750 tons of spent-brewing-grain to organic dairy farmers in the Willamette Valley for cattle feed.

Not counting the spent grain, the company recycles or composts 85% of its waste, with only 11% going to landfill. Counting the grain, Hopworks diverts 98.6% of its waste from landfills!

The company is also serious about reducing water usage in the brewing process with its water initiative. 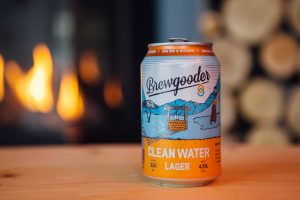 Brewgooder is “the craft beer on a mission to bring clean water to 1 million people.” Since being set up in 2016, the company has helped to fund over 130 projects for 64,700+ people in Malawi by donating 100% of its profits to clean water charities.

Brewgooder is helped out by Brewdog, who brews its beer at zero margin.

The company launched its product ‘Clean Water Lager’ on World Water Day 2016, asking craft beer fanatics to help it along on its mission.