3 Charities to Donate to on World TB Day

Today on #WorldTBDay2020, global health authorities are reminding us that tuberculosis (TB) is still the deadliest infectious disease in the world.

As the coronavirus death toll mounts, global health authorities like the WHO are reminding us on World Tuberculosis Day that tuberculosis (TB) is still the deadliest infectious disease in the world with over a million deaths reported every year.

Often considered a disease of times past, the resurgence of TB was declared a global emergency by the WHO in 1993.

World TB Day is commemorated on March 24 to raise public awareness about the devastating health, social and economic consequences of the disease, and to step up efforts to end the global TB epidemic. The date marks the day in 1882 when Dr Robert Koch announced that he had discovered the bacterium that causes TB, which opened the way towards diagnosis and a cure.

“TB remains the world’s deadliest infectious killer. Each day, over 4000 people lose their lives to TB and close to 30,000 people fall ill with this preventable and curable disease,” the WHO stated in their #WorldTBDay2020 announcement. “Global efforts to combat TB have saved an estimated 58 million lives since the year 2000.

“To accelerate the TB response in countries to reach targets, Heads of State came together and made strong commitments to end TB at the first-ever UN High-Level Meeting in September 2018.”

In 2018, the largest number of new TB cases occurred in the South-East Asian region (44 percent), followed by Africa (24 percent) and the Western Pacific (18 percent).

Though the global death rate from TB dropped more than 40 percent in the years between 1990 and 2011, there are still crucial gaps in coverage and severe shortcomings when it comes to diagnostics and care options.

Furthermore, we are currently seeing an alarming rise in cases of drug-resistant and multidrug-resistant tuberculosis (DR-TB and MDR-TB) that do not respond to the customary first-line drugs.

TB is caused by a bacterium (Mycobacterium tuberculosis) that is spread through the air when infected people cough or sneeze.

The disease most often affects the lungs but it can infect any part of the body, including the bones and the nervous system.

Symptoms include a persistent cough, fever, weight loss, chest pain and breathlessness in the lead up to death. TB incidence is much higher and is a leading cause of death among people with HIV.

With the current covid-19 crisis causing panic to both the healthy and chronically sick, it is hard to imagine how those affected by such a deadly respiratory illness would feel at this time.

Under the theme ‘It’s Time’, the spotlight this year for World TB Day is on urgently accelerating the TB response to save lives and end suffering, building on high-level commitments by Heads of State at the 2018 UN High-Level Meeting on TB.

Here, learn more about 3 charities with a long history in supporting and treating those with TB. As the theme and the current crisis makes clear, there is no better time to act.

3 Charities to Donate to on World TB Day 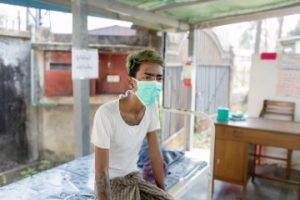 Médecins Sans Frontières/Doctors Without Borders has been fighting TB for over 30 years. They provide treatment for the disease in many different contexts, from chronic conflict situations, such as Sudan, to vulnerable patients in stable settings such as Uzbekistan and the Russian Federation.

At the core of MSF’s identity is a commitment to independence, neutrality and impartiality. The charity has been independently providing medical care and logistics, finance and communications since it was established in 1971.

In 2018, in response to the dramatic increases that year, MSF started 19,400 people on TB treatment, including 2,840 with drug-resistant TB.

A promising new diagnostic test, Xpert MTB/RIF, was introduced in 2010 and MSF has used it in many of its programmes since. It’s not applicable to all settings, nor is it effective for diagnosing children or patients with TB that occurs outside of the lungs (extra-pulmonary TB), so MSF continues to call for further R&D in diagnostics for TB.

The British Lung Foundation has been researching lung conditions for 30 years and thanks to UK donations the charity invested £1.8m in vital lung disease research last year.

Having lung disease brings questions and anxiety about the future. The BLF’s helpline, support groups, web community and easy-to-understand information offer vital hope and support so that nobody has to face that alone. The BLF helpline answers 20,000 calls a year.

The charity aims to prevent lung disease by campaigning for positive change in the UK’s lung health by raising awareness about lung disease, the dangers that cause it, and how to look after your lungs.

The charity’s Taskforce For Lung Health recently published its 5 year plan, and the NHS listened making respiratory an NHS priority for the first time.

The BLF has published extensive information and support for those affected by a lung condition concerned about the coronavirus and say their team of experts are working tirelessly to provide health advice at this time.

Image via TB Alert in Africa

TB Alert is the UK’s national tuberculosis charity that focuses on TB both in the UK and overseas giving them a unique perspective in order to address issues around TB that are common both to low incidence countries like the UK and high incidence regions such as Africa and Asia.

TB Alert was registered in late 1998 and launched at the Houses of Parliament on World TB Day (24th March) 1999.

The charity was set up by people who felt that with its long tradition of TB work, there should be a greater response in Britain to the resurgent threat of tuberculosis.

In 2000, TB Alert funded their first projects in India (in Delhi and Jharkhand State), leading to the establishment of sister organisation, TB Alert India, four years later. Their projects in the region are working among the poorest communities to increase their access to TB and HIV treatment and to build their understanding of their rights to treatment and good health.

TB Alert’s Honorary President, the late Sir John Crofton, was awarded the Union Medal in 2005, the highest award of the International Union Against TB and Lung Diseases (IUATLD) for his outstanding, long-term contribution to the control of tuberculosis.

In 2008, TB Alert developed The Truth About TB programme as the Department of Health’s lead partner in delivering the TB awareness raising objectives set out in their 2004 TB action plan and In 2011 the charity setup their patient support community.

Knowing that people affected by TB may have particular concerns about the coronavirus that is currently circulating around the world and to help reassure and advise, TB Alert has developed a Q&A on the relationship between the coronavirus, which causes the illness COVID-19, and TB.

Zomato is Set to Offer “Period Leave” to Employees In India